Ysaÿe: 6 Sonatas for solo violin op.27, Sonata for 2 violins in A minor 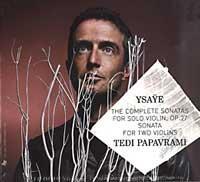 Ysaÿe’s six sonatas for solo violin have witnessed a surge of popularity in recent years, at least if the number of recordings is anything to go by, including notable versions by Henning Kraggerud (Simax), Samika Honda (Polymnie), Kristóf Baráti (Brilliant) and, newest of all, Tianwa Yang (Naxos). Tedi Papavrami’s credentials as an Ysaÿe player of sensitivity and insight were established by his probing account of the Poème élégiaque (Aeon).

He also passes the acid test of the Second Sonata’s opening ‘Obsession’ with flying colours, embracing its multi-personality reminiscences of Bach and the ‘Dies irae’ chant with a virtuoso flamboyance that grips the imagination. Ysaÿe claimed that the Third Sonata was directly inspired by concerts of Romanian folk music he had witnessed in his youth, and here the improvisatory nature of its single movement tingles with excitement as Papavrami shifts from nervous inquisitiveness to outbursts of angst-fuelled despair with chameleonesque ease.

In the wrong hands the one-movement Sixth Sonata can feel like a bit of an anticlimax, but here again Papavrami’s dazzlingly agile, micro-inflected musical reflexes cast a hypnotic spell, enhanced by tactile engineering.

Providing the icing on the cake is a dazzling performance of the duo sonata with Bulgarian virtuoso Svetlin Roussev, concertmaster of Myung-Whun Chung’s Seoul Philharmonic since 2007.