Why I became a musician, by Bronislaw Huberman

In this article from the May 1911 issue of The Strad, the great violinist, who is featured in our October special edition, explains his musical background and practical approaches 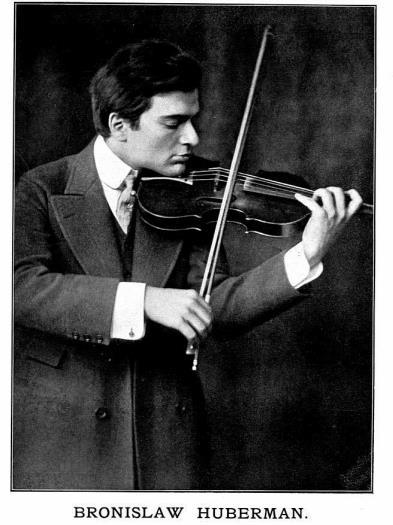 Before I introduce you into my “workshop” I should like to put forward an argument in favour of the theory that only outward circumstances, and by no means a special endowment, are responsible for the choice of a career. This argument will also give the answer to the question, “Why I became a musician?” I deny any special gift. There are only different grades of talent, which I would define as a greater or lesser capacity of the brain to absorb impressions from without and give them out again in an entirely new form. I even go further, and say that anyone who has achieved eminence in one walk of life would have gained equal distinction in another if the same assistance had been given him in either case. Outside influences which play a part here are family tradition, the question of means, education, environment, impressions of nature, influence of parents, and lastly – purely physiological conditions. Certainly one or other career might be closed to a generally gifted individual, but that would be explained by the stunting of a sense, or an overwhelming inclination for a special calling.

Every human being is subject in his inclinations to the influence and habits of his age, his nationality, and his surroundings. How did I become a musician – a fiddler? My father had an extraordinary predilection for music, and always regretted the fact that he himself was not a musician. Already as a child, at four years old, I have heard my parents say that I could sing anything I heard. But goodness me! if all the children who can lisp musically and break up musical instruments instead of bricks and trains were as musical as their parents think them, the world would be peopled with musical geniuses. I might have continued playing with bricks had not outside happenings intervened. Strange as it may sound, my career was indirectly determined by the Shah of Persia. A child-prodigy in Warsaw (my birthplace) received the favourable notice of the Shah, and forthwith every parent became desirous of attaining the same fame for his child. The result was that I was made to study music. A piano was too expensive, violins were cheaper, and meeting with a poor fiddler I bought a fiddle from him for three roubles, and began to take lessons from him. My master saw much promise in his new pupil, as he discovered that my hands were specially made for violin playing. I did indeed make extraordinary progress in a short time, but that is natural, as one gains results quickly in musical subjects, because the accumulation of positive knowledge plays a less important part than in other branches of mental work, whereas direct skill – in which I include every kind of inspirational faculty – stands foremost in music. I played frequently in public, and combined study with these public appearances, and this was a good thing, for a concert is of great worth as a means of education.

The artist gets an immense advantage from the inspiration which more often appears to him in the concert hall than in the troubled atmosphere of his study. I was for the most part self-taught, for at twelve years old I had my last lessons. As I was not conceited enough to consider myself a finished artists, I do not feel that I am repudiating a debt of gratitude to my teachers when I say this. In teaching myself I early learnt the curse which is bestowed upon us instrumentalists: “In the sweat of thy brow shalt thou gain thy technique.” Truly there is no greater torment for an artist who feels and thinks than to be constantly repeating technical passages from works which have been previously mastered and laid aside. People often express wonder that an artist always need so practise. Nothing is more strange than such an expression, for even though the accomplishment of a musician is an intellectual one it is nevertheless carried out by the arms and fingers and these need drill and training. No man would trust his legs to carry him up Mont Blanc after he had spent several weeks in bed, and the fingerboard is to a violinist what Mont Blanc is to a tourist.

Now, with regard to a methodical acquisition of technique. My theories are – (1) Work at studies which deal with the most frequently recurring stretches, runs, and varieties of bowing. (2) Make use of the technical knowledge previously gained when studying a new composition. (3) Training – here the most depressing fact is that really successful passages often fail when connected with the whole. Either one’s strength does not carry one through the entire work, or the “memory of the fingers” is at fault. What we understand by memory has really only a small share in playing from memory. There is no absolutely certain “memory.” What gives us the power to play a whole repertoire by heart is a specific musical ear, which enables us to put the work together like the links of a chain. To this is added something much more important: the “Memory of the Fingers.” This has often saved me unconsciously in many situations in which I have found myself, either through passing carelessness or momentary weakness. The fingers have so impressed themselves with the many thousand notes in a piece, that they accomplish these successive notes with a certain unconscious movement, like the performance of many of our life’s functions. Nothing gives a greater idea of the immense value of work and training than this. A real danger to violinists – that of acquiring mannerisms – I overcome by refraining from playing for a period of several weeks when I return from a concert tour of several months duration. In training, the psychological aspect must not be forgotten. For instance, I might stumble over a run or a particularly difficult note. I have often succeeded in overcoming the difficulty by means of auto-suggestion, because I either, as it were, challenge the note by strongly accentuating it, or remain on it a long time, but this, be it understood, only in my mind and not in reality.

The technique of the true artist must be more solid and reliable than that of the mere virtuoso. The public has a fine instinct, and does not carelessly pass by the divine signs of talent, but, through not using the sense of logic and perception fails to distinguish between what is accomplished by work and what by talent. For instance, things often erroneously reckoned as difficult are pizzicato and harmonics, which are quite easy in themselves. If the public, on the contrary, does not notice the difficult passages, it is a good sign for the artist.

With talent there rises simultaneously in the man the irresistible desire to use it. Gifts bring as many delights as duties and the least of us should find himself prepared to carry out the obligations resulting therefrom. Therefore I would say, the greater the talent the greater the need for work.

Bronislaw Huberman is one of the great string players featured in the October issue of The Strad, guest edited by Steven Isserlis. Order a copy here or download the digital edition.