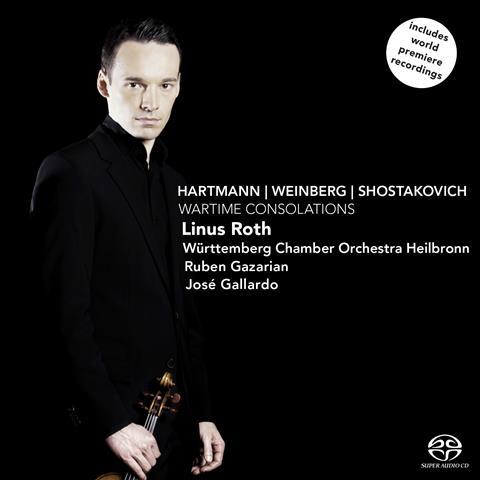 A Shostakovich premiere in 2015? Linus Roth has done his homework and dug out the unfinished movement for a violin sonata which became the Tenth Symphony (a cellist should do the same for the composer’s sketches prior to the Viola Sonata). As it stands, the fragment is more even-tempered but still imbued with the tragicomic yearning of the mature composer’s style, until it breaks off on the cliff-edge of the development section.

Weinberg’s Concertino, though slight relative to the Violin Concerto (which Roth has already recorded for Challenge), is still a worthy companion to Hartmann’s Concerto funebre : the two works were cast in the crucible of war, in a personal if slightly regressive idiom that made both composers outsider figures on the edge of cultural life in authoritarian regimes. Roth’s lemon-sharp tone and sugar-spun phrasing distinguish his approach to the Hartmann from that of both Gil Shaham (Canary Classics) and Isabelle Faust (ECM), though in Weinberg’s more Romantic style he slightly overcooks the vibrato.

The Moldavian Rhapsody explodes into vividly folkloric life halfway through this string-band arrangement, though with José Gallardo on hand for the Shostakovich, it’s not obvious why Roth spurned Weinberg’s original piano accompaniment. The Heilbronn orchestra is tightly directed by Ruben Gazarian, sounding larger than the sum of its parts in the fairly vibrant acoustic of a local modern hall. It’s a short (55-minute) but bleakly compelling disc. Listening straight through, which you should, you wouldn’t want it to be any longer.