Grimson, one of the first women in the Queen’s Hall Orchestra, London, gave her final pupil, Liddell, a solid technique that she still relies on 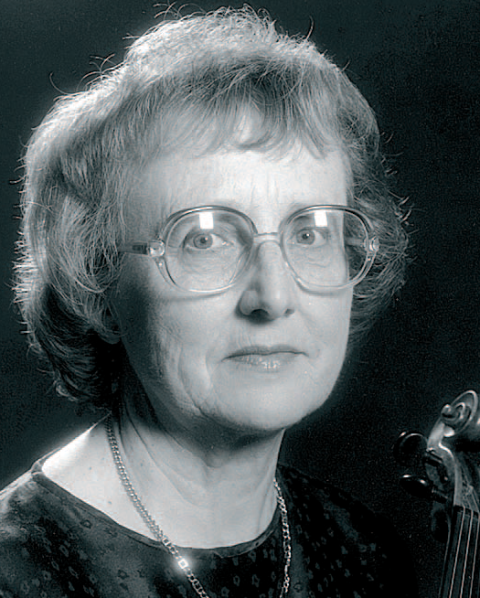 By the time I started studying with Jessie Grimson she was quite an elderly lady. She had studied with the great late-19th-century violinist August Wilhelmj and had successful string quartet and solo careers. But she had retired from orchestral playing and was living in a residential hotel in Bayswater, west London.

My lessons with Jessie took place at my home every Friday afternoon as my formidable mother had persuaded my head teacher to let me off school early, much to the disgust of some of my teachers. As Jessie sat on the train on her way to our home, she would finger and bow any new piece that she wanted me to learn that week. One week she even wrote a little cadenza at the top of my first Mozart violin concerto as she travelled to my lesson. Jessie would turn up on our doorstep dressed in a heavy fur coat and in summer, a light one – she always felt the cold – and the music she brought for me would smell strongly of peppermint.

Our lessons were very structured and serious. I was only five years old when I started the violin, but in those days children did what they were told and no one tried to make learning ‘fun‘ to keep you motivated. But I loved both Jessie and the violin.

Each lesson started with open-string bowing. I had to stand in a beautiful open posture, my shoulders free and violin held high, playing open strings until I got my bow going. In French they say tirer and pousser when talking about the bow, but Jessie said that everything about bowing should be tirer – drawing the sound from the vibrating wood of the violin through the medium of the string. As I approached the end of each down bow, she‘d tell me to turn my wrist in a flattened figure of eight and drop my fingers, preparing to ‘pull‘ the up bow, instead of ‘pushing‘ with a depressed wrist.

Every ten minutes or so she would sit me down for a little rest and get me to hold a pencil in my right hand to practise articulating my fingers and thumb together for a free bowing action – a simple exercise that my students still struggle with today.

We would work on scales and technical studies – she was a great admirer of Š evÄík. She taught me that the position of the fingers on the string affects both tone and intonation, and showed me how to place my left-hand fingers slightly obliquely on to the string, never using the very tips of the fingers. She was keen that the left wrist should make a natural flowing line from the arm to the fingers and that to reach high positions you should elongate the arm and hand into a long curve, rather than pull in at the left shoulder.

Jessie was determined to get me playing quartet repertoire from an early age. She would invite her professional friends to come to our house and play quartets with me; initially I played second violin but very soon I played first. She also took me to concerts to hear Kreisler, Milstein, Menuhin, Sammons and Haendel, and told me that this is what I must aspire to. Jessie always fingered and bowed my parts for me, but I now believe that where fingering is concerned students should start thinking for themselves early on. A teacher can always suggest alternatives if something does not work.

After ten years, Jessie decided it was time for me to move on to a new teacher, so I studied for almost two years with Rowsby Woof, head of strings at the Royal Academy of Music. He had a fearsome reputation but was kind to me. After he died, I went to Paul Beard, leader of the BBC Symphony Orchestra. He was a fine musician and I learnt a lot about music and musicianship in our four years together. Then I had a few lessons with the analytical Stefan Krayk, who had been an assistant to Carl Flesch. I was brought up with a healthy wrist vibrato, but he gave me a wonderful exercise to develop a finger vibrato for playing expressive music: lie your finger gently on the string and rhythmically squeeze the string down on to the fingerboard with the top joint for four beats, repeating the drill faster each time and never implicating the wrist. Finally, I studied with the great Sascha Lasserson who introduced me to the Russian school of playing. None of my later teachers was dogmatic or wanted to change my technique; they all said I had been beautifully taught and that my posture and playing style were exceptionally free and relaxed. Jessie‘s grounding was so solid that I have never forgotten it, and I have based my own teaching on what she taught me.

Jessie died shortly after World War II, but as long as she could she would come to my concerts. I always felt good when she was in the audience and after each performance she would send me a résumé of how she thought I was playing.

After our last lesson together, Jessie presented me with a beautiful gold-mounted French bow that her teacher, Wilhelmj, had given her. I still have it – it‘s always been my favourite bow.

Nona Liddell was the leader of the English Quartet (1957-1973), among many other groups, and led the London Sinfonietta (1970-1994), with which she often appeared as a soloist. She also taught for many years at the Royal Academy of Music and later at Trinity College of Music, before retiring in 2006.

This article was first published in The Strad's July 2007 issue. Subscribe to The Strad or download our digital edition as part of a 30-day free trial. To purchase single issues click here.