Our 2019 calendar brings together twelve of the finest instruments ever made by Antonio Stradivari, all of which were on display at the Tokyo Stradivarius Festival, where the video below was taken. Description by Alessandra Barabaschi 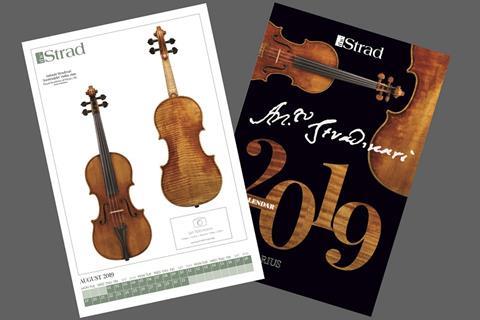 The earliest known instruments by Stradivari are dated around 1666, at which time at least three other talented luthiers were active in Cremona: Andrea Guarneri, Francesco Rugeri and, most of all, the brilliant Nicolò Amati. Although no evidence has so far been found to confirm the assumption that Stradivari had been a pupil of Amati, the latter’s death in 1684 must surely have affected him, for afterwards he slowly but steadily modified his models as he freed himself from Amati’s influence.

In the decade between 1690 and 1700 Stradivari developed the ‘Long Pattern’. The bodies of these instruments are roughly a centimetre longer than those of earlier ones, resulting in the overall model looking flatter, narrower and less hollowed when compared with his previous ‘Amatisé’ model.

Our journey through the master’s eclectic production begins with a violin that is considered by some to be the most important example of this period: the ‘Kustendyke’ of 1699, named after its former owner, a Dutch art and music collector, and since 1961 part of the prestigious collection of London’s Royal Academy of Music.