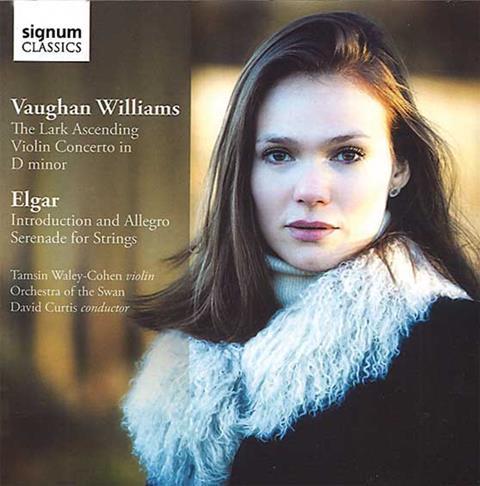 Written for Jelly d’Arányi (who, the composer thought, took scant advantage of her six-month exclusive performing period), Vaughan Williams’s Violin Concerto has few champions even now. It’s the least well-known item on this disc of otherwise popular English classics. Tamsin Waley-Cohen doesn’t quite make the piece her own. The first-movement Allegro pesante calls for more vigorous roistering, and there’s some mild unease in the semiquaver passages, leading to a touch of rhythmic unsteadiness. For me the second movement needs more bloom to the sound (and to the recording also), but Waley-Cohen’s approach is primarily reflective, underlining a vulnerable and thinly melancholic quality rather than aiming for sweetness. She takes a similar stance in The Lark Ascending. There may be less effortless soaring and freefalling here than in other performances, but there is a dramatic realism that is poetic in its own way. This is no joyously chirruping lark, and because the tone breaks up in Waley-Cohen’s closing ‘sur la touche’ passage, we are left not with a lark disappearing into the distance but rather with one possibly being subdued by its surroundings.

In Elgar’s evergreen Serenade for Strings, and his Introduction and Allegro, David Curtis leads his orchestra with assurance, if occasionally we miss the gentle swell of long-breathed phrases. The market in these works is crowded, and although there are cleaner lines in this chamber-orchestra performance, more ardent versions are available.