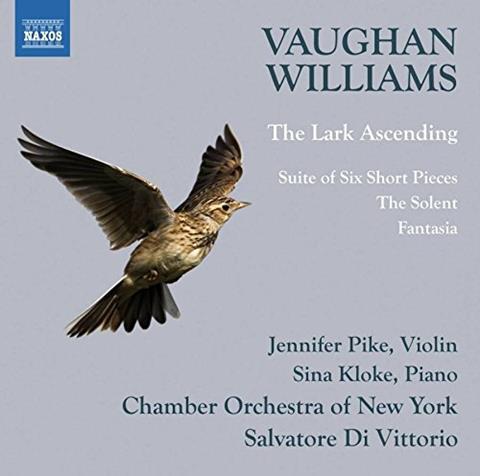 Jennifer Pike opens The Lark Ascending with delicacy and grace, her vibrato contained and expressive. As she moves into the first melody, that vibrato occasionally stops altogether, leaving pure, expressive notes within the exquisite soundscape. This whole first section is a masterclass in how to structure an extended musical paragraph. The young players of the Chamber Orchestra of New York then come into their own with some fine solo playing, particularly from the flute, as Pike pirouettes lissomly around them (the recording is clear and well balanced). Her playing is clean and fluent, each note perfectly focused and placed. Her double-stopped allargando phrases weaving down in 5ths (mostly) are magical. She has the gift of making time stand still, even as the music flows forwards. The final cadenza is sublime, as the Lark ascends to top B and disappears.

This is the last work on the disc, as it should be: no one would want to hear anything else after that. Before it are three early works by Vaughan Williams. His tone poem The Solent from 1903 receives a stirring rendition. Pianist Sina Kloke joins the orchestra for his Fantasia, played with dramatic flair, and gives the first recorded performance of his suite of Six Short Pieces for piano.