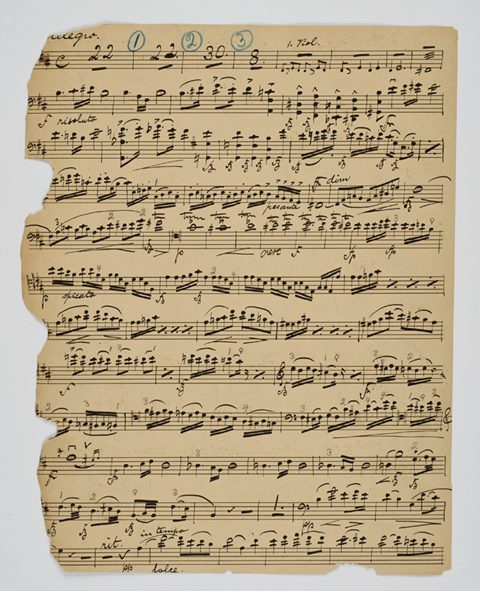 An unfinished manuscript of the solo cello part of Dvo?ák’s Cello Concerto has come to light in New York. It is to be presented to the public for the first time at an event in the city on 5 April. The manuscript (pictured) appears to have been made between 1894–5, midway through the concerto’s composition, and displays several differences from the first edition published by Simrock in 1896.

The pages were discovered by amateur cellist Robert A. Williamson Jr, among the papers of his late father Robert Williamson Sr, one of the last students of the German–American cellist Alwin Schroeder (1855–1928). A contemporary of Dvo?ák, Schroeder performed the concerto in Boston in 1896. Following Schroeder's death in 1928, his daughter gave Williamson Sr several of her father's manuscripts. In 2012, while researching an article for The Strad, cellist Jeffrey Solow learnt of the manuscript’s existence and examined it in detail.

‘It was incredibly fascinating to see,’ Solow said. ‘It clearly wasn’t the version of the concerto we know, as it was much shorter, the ending we’re familiar with wasn’t there, and there were several large gaps in it. It’s possible Dvo?ák had a copy made of the concerto’s unfinished cello part after Schroeder expressed an interest in giving the premiere.’ Supporting this argument are programme notes written for the concerto’s first performance in Boston, which state that Schroeder assisted in some of its technical parts. In the event, Dvo?ák revised the concerto thoroughly with the help of cellist Hanuš Wihan, although the premiere was eventually given in 1896 by Leo Stern.

The manuscript appears to have been made by a copyist, and includes some bowings. Fingerings are pencilled in, possibly by Schroeder. ‘A lot of these fingerings also appear in the printed first edition,’ said Solow. ‘What that suggests to me is that there was a copy of the cello part in New York that was brought back to Bohemia by Dvo?ák.’

Contextual evidence, and discrepancies between the published cello part and the orchestral score, also appear to support the theory that there were two streams of transmission in preparing the final version. ‘Certain things, such as bowings, don’t match each other,’ said Solow. ‘This manuscript tends to match what’s in the cello part, not the score.’

Jonathan Del Mar, whose edited urtext edition of the concerto was published in 2012, said, ‘This is  certainly significant in that it is one of the missing links, and fills a gap in the original source materials.’

The manuscript will be presented in the Dvo?ák Room of the Bohemian National Hall, New York, in an event organised by the Violoncello Society of New York and the Dvo?ák American Heritage Association. It will be followed by a panel discussion involving Williamson and Solow, as well as music professor Michael Beckerman, author and conductor Maurice Peress, and cellists Terry King and Christine Walevska.