Surprisingly little has been said in the literature about the sideways left-hand movement, although any passage over more than one string uses it. Rok Klopčič researches 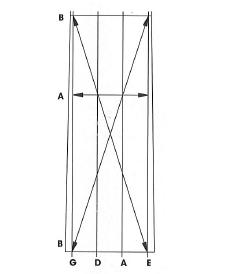 Lateral movements of the left hand are of the same importance as vertical or horizontal ones. This fact is rarely, if ever acknowledged by leading authorities. They usually consider one or two of the most obvious ones in a few cursory words only, never assembling all the lateral movements in one complete picture.

The adjective 'lateral' depends on the point of observation; figure 1 clarifies the different directions, with A showing lateral movements and B presenting the same movemenent combined with a change of position (horizontal movement).

In every lateral movement there is a more or less pronounced steering motion of the left hand, from the shoulder, to the left or right (according to Ion Voicu and Konstantin Mostras). This movement is the smallest in the lateral half-movement, where a finger moves from two strings to one string, as in this exercise by Henry Schradieck:

It is greatest in this exercise by Flesch:

In the past, lateral movements were acknowledged only as the means to forming chords. Flesch published what he called chord exercises, in his Urstudien (1900), which are still the best and serve as the most appropriate gymnastic introduction to lateral chord movement. In his magnum opus The Art of Violin Playing (1923) he changes the description of this movement to Streck - and Beugebewegungen, stretching and bending exercises, but still mentions its use in chords only. At approximately the same time, 1921, Dounis, in his work The Artist's Technique of Violin Playing, describes 'the movement from the right to the left and vice versa' and, like Flesch, limits its use to 'chords in three or four notes' only.

The ideal way of preparing chords is described by Mostras: all the necessary fingers should be placed simultaneously on the strings. This is not often achieved, though, and it is usually better to follow the advice of Francesco Sfilio, who recommends that the setting of the chords should always start with the first finger with the other fingers following in natural order - second, third and fourth - irrespective of the string. The time taken between finger landings should be so short that they appear and sound simultaneous.

Another obvious type of lateral movement is the repeated crossing of fingers over two or three strings. It is used a great deal in different studies and compositions, attention usually directed to the problems of the right hand. The most difficult examples can be found in Paganini's Caprice no.2. Similar but simpler exercises in one position are given in Ševčik's op.1, while Rodolfo Lipizer offers more complicated versions under the title Salti (jumps) in nos.19 and 31 of the second part of his La tecnica superiore del violino.

When connecting some doublestops there can be a small lateral movement, a'crossing of the strings', as Galamian calls it. However, he does not describe it as lateral, but finds in pairs of sixths and fourths a 'horizontal type of sliding motion without completely lifting the fingers from the fingerboard'. Clearly, the word 'lateral' instead of 'horizontal' in the previous sentence would be more accurate. In connecting double-stops we must frequently decide between horizontal and lateral movements. A good illustration of this is a passage from Glazunov's Violin Concerto (example 1) as fingered by two eminent Russians, David Oistrakh and Yuri Yankelevich whose fingerings are shown above and below the stave respectively. Oistrakh makes a small lateral movement in the shift to the double-stop on the third beat of the second bar, whereas Yankelevich shifts horizontally.

The following Menuhin exercise is a good preparation for such a realisation of fifths:

The interval of the fifth is linked to another movement which could be called a lateral half-movement. In the literature it appears very rarely and often sounds unclean. An example from the Bach Chaconne shows the problem, in the second beat, where the third finger must move from holding the D-A fifth chord across two strings, to just playing the A of the B-A chord: 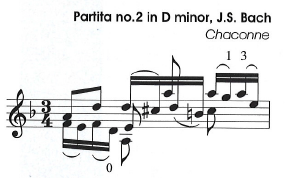 Technical exercises for such movements are practically non-existent - it is only in Schradieck's School of Violin- Technics that we can find at least one exercise of this sort, as shown earlier.

In investigating lateral movements it helps to examine them in different passages, recognising that no passage over more than one string is possible without a lateral movement. Flesch doesn't see the link between what he called 'chord movement' and 'change of strings'. Nevertheless he recommends small lateral movements for different scales and chordal passages, for example in the Bruch Concerto, where the square notes show how you can make the lateral movement before the note is played: 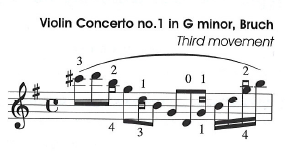 The importance of quick, precise lateral movements of the fingers in brilliant passages is recognised by Mostras in his excellent Esquisse no.2, which should presumably be played without preparing the fifth, so that both fingers are changing strings on each note:

Significantly this study was included by the best Soviet experts, Yampolsky, Y.I. Rabinovich and M.B. Pitkus, in their collection of studies, Strengthening of the Fingers and Development of Velocity.