The Beatles and strings – part one

Love Me Do, the Beatles' first single, was released in October 1962. We marked its 50th anniversary with an investigation by Kate Mossman into how the Fab Four brought string music into their work 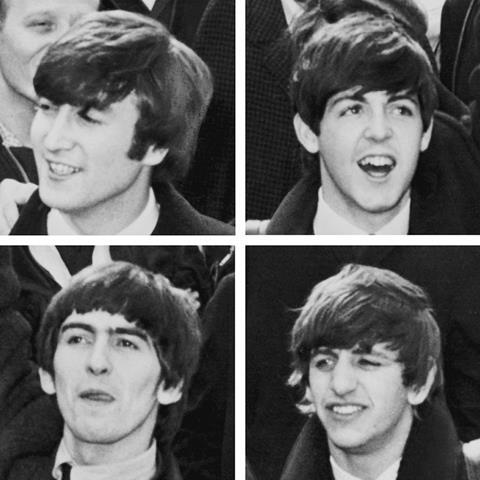 Contemporary reviews of the Beatles’ most successful album, Sgt Pepper’s Lonely Hearts Club Band, suggest that for some people the Swinging Sixties never arrived. ‘Trust the Beatles to come up with something different!’ wrote Allen Evans quaintly in the New Musical Express (at the time the UK’s leading pop magazine). He describes the title track as a ‘beat-raver’, while Lovely Rita is a ‘saucy song with a jog-beat that will get your toes moving’. And Being for the Benefit of Mr Kite! was described as ‘fairground music brought up to date and quite fascinating to hear’.

A host of groovies including Mick Jagger, Marianne Faithfull and Pattie Boyd appeared in a promo film for the album’s final track, A Day in the Life, along with the orchestral players hired to record the song’s famous 24-bar improvised glissando. The musicians are from another age, trussed into tailcoats with thick-rimmed glasses and shiny pates. The band made them wear novelty items – extended Pinocchio noses, a gorilla paw on the bow hand of the lead violinist – as though caricaturing the old-world musical order they’d managed to overturn.

Strings had always been a staple of 50s and 60s popular music, from the light classical fare that Paul and John grew up listening to on the wireless – Ronald Binge, Eric Coates, Albert Ketèlbey – to crooners like Matt Monro, with their plush orchestral backing and tear-jerking vibrato. But the Beatles and their producer, George Martin, changed the perception of what strings could do, and like everything in their world, it happened in record time – between the relatively conventional string quartet on the 1965 ballad Yesterday and the strident swoops of the anarchic Glass Onion in 1968. So where did it all start? And whose idea was it to use strings in the first place?

‘Generally mine,’ says Martin, ‘starting of course with Yesterday. I had suggested to Paul that we use strings. He said he didn’t want “that Mantovani stuff”. I told him that was not my intention: the strings did not need to be like that. I wanted just four players – a string quartet. Much more effective.’

Martin’s minimalist arrangements came to the fore on the recording of Eleanor Rigby in 1966. The hymn to suburban loneliness was once referred to as ‘a tragic ballad in the Dorian mode’ by composer Howard Goodall. It features no rock instruments at all – bass, drums and guitar are replaced by an octet. Like so many Beatles compositions, the song came along in a moment of inspired whimsy: McCartney originally started playing around with the name Miss Daisy Hawkins, and the sock-darning priest was Father McCartney until he decided that would confuse people. John Lennon said in one of his last interviews that Paul got turned on to strings through his then-girlfriend Jane Asher, who was rather posh and played him a lot of Vivaldi.

‘All credit to Paul for Eleanor Rigby,’ says Martin. ‘He thought of the song in terms of a string backing, and wanted a repeat of the effectiveness of Yesterday. I told him I wanted to double the strings as I wanted a more strident sound. I have to admit my score was influenced by Bernard Herrmann’s work on Psycho, but it works well and sounds as effective today as the day it was recorded.’

That Martin conceived the strings in terms of a horror film suggests a development in their function, from the light shading of sadness or warmth that a typical ballad accompaniment provides, to an active, aggressive component – another character vying for space with the solo voice. The raw staccato stabs are almost completely free of vibrato, quite a revolutionary move for pop recordings at that time. The strings were also close-miked and compressed (the Beatles limited dynamic variation using devices such as the Fairchild 660 limiter), giving them a heightened, larger-than-life presence.

Eleanor Rigby was recorded in April 1966 for the Revolver album, released later that same year. Within five months, the psychedelia bleeding into other songs on the LP (from sitars to vari-speed tape effects) was informing the early sessions for Sgt Pepper.

In the atmosphere of sonic experimentation, Martin continued to think beyond strings as a backing texture or a musical mood enhancer, breaking down the classic quartet and pulling out the bare components to replace instruments in the rock band.

Recorded in November the same year, Strawberry Fields Forever featured three cellos and no other strings at all. ‘I needed the cellos for the lower end,’ Martin explains. ‘But the track didn’t need upper strings because the trumpets covered that end of the spectrum. I always believe that less is more.’

The song was inspired by Lennon’s memories of a Salvation Army children’s home in Woolton, a suburb of Liverpool, not far from where he lived with his aunt. He’d drag her there to play in its communal gardens whenever they heard the band strike up. Things like that are a reminder of the musical backdrop the Beatles sprang from: all military brass, Glenn Miller and easy listening. At this point in his musical development (and with the aid of plentiful mind-expanding drugs), Lennon drew an awful lot from childhood recollections, the fractured, colourful imagery of youth perfectly complementing the stuff he saw on his chemical journeys.

He described Strawberry Fields Forever as ‘psychoanalysis set to music’ in a 1970 radio interview. The circumstances of its production give some insight into how Lennon worked with Martin – where McCartney might have come along with clear ideas inspired by Vivaldi, Lennon’s interaction with the orchestral world was more tentative and awkward. Equally approving of the band’s rock version of the song and Martin’s string version, he insisted the producer run the two together – regardless of the fact that they were at different speeds, in different keys.

Speaking to Rolling Stone in 1971, Lennon said that Martin’s role was to ‘translate’ the band’s ideas to players from outside: ‘We would say “play like Bach” or something, so he would put twelve bars in there. He helped us develop a language to talk to musicians.’ Admitting he was ‘very, very shy’ around other players, he added, ‘I didn’t like to have to see 20 guys sitting there and try to tell them what to do.’

From the October 2012 issue. Subscribe to The Strad to read articles on all facets of the string music world each month. Or click here to find out about our digital edition