Technique aplenty, but musicality wins the day in Weimar 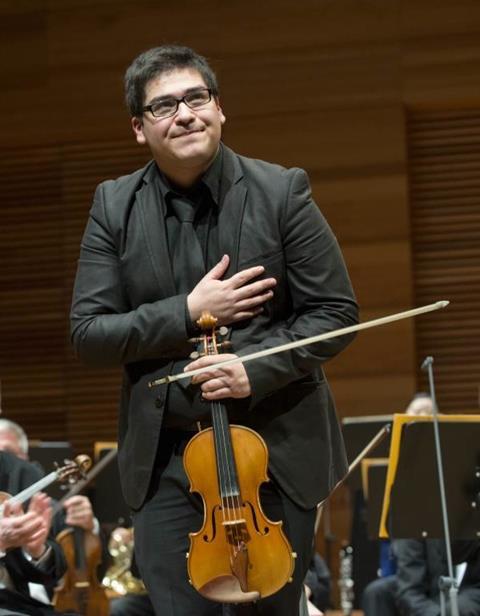 At the International Louis Spohr Competition for Young Violinists, age poses no limits. One might watch a procession of pre-teens perform the complete Bruch Concerto one moment, and spot a judging panel composed of high school students the next. This year’s contest, which took place at the Liszt School of Music in Weimar, Germany, from 28 October to 8 November, featured its first junior jury alongside the main delegation, which ranged from London’s Royal College of Music’s Itzhak Rashkovsky to the German Süddeutsche Zeitung newspaper critic Harald Eggebrecht.

The competition includes three age-specific categories, the first of which is open to players under 14 years old. By the close of the semi-final round some onlookers were pondering the wisdom of allowing candidates with so little life experience under their fingers to tackle Bruch and Mendelssohn concertos in the finals, but in the event there was a healthy share of prodigious contributions, particularly in the realm of technique. The jury admitted one extra player due to what jury chairman Friedemann Eichhorn described as the ‘unusually high level’, leaving seven candidates to perform full concertos with piano accompaniment at the main building of the Liszt School.

Fourteen-year-old Ziyu He’s assured and enthusiastic rendition of Saint-Saëns’s Concerto no.3 was a highpoint of the morning, even if his theatrical presentation bordered on the artificial. At times the Chinese student revelled in his own warm sound, bopping his head through the dotted rhythms of the final movement. Rion Fukada, from Japan, played the same work with razor-sharp focus and a burnished tone – no doubt partly thanks to the restored 19th-century French instrument at her disposal – but struggled to carry through the elegiac lines of the slow movement.

American Maria Lakisova, in the Mendelssohn Concerto, stood out for her sensitive musicianship and communication with the pianist, who happened to be her mother, although she wasn’t ready for the piece technically (perhaps it would make sense to include Mozart on the list of repertoire?). The four candidates who chose the Bruch Concerto produced performances that ranged from a beautifully intoned and pristine account by Sophie Wang of Taiwan, who has studied with Igor Ozim at the Mozarteum and attended masterclasses in Weimar, to that of Norwegian Ludwig Gudim, who warmed up from a painfully shaky opening movement to give an athletic, intuitively paced Allegro energico.

The final round of the middle category, for violinists aged 15 to 17, was devoted exclusively to the Bruch, with candidates accompanied by the Liszt School of Music orchestra under the baton of local professor Nicolás Pasquet. Performances took place in the basement concert hall of a modern, Bauhaus-style building on the complex of the Liszt School of Music, which occupies the luxurious park grounds of an 18th-century palace. The school’s students, some of whom board, receive training by Liszt School professors and often stay in town for the next level of their education.

Opening the round was Hungarian Vilmos Csikos, 17, who displayed some of the essential ingredients – an expressive tone, a natural sense of pace – but not an engaging presence. The Ukrainian Yulia Van, shimmering in a golden gown, offered a more fragile, clean but highly controlled reading; in a twist to the usual scenario, her upper range trumped the lower. Fifteen-year-old Nathan Mierdl, of French–German descent, communicated powerfully with the orchestra, savouring Bruch’s elegiac lines; Japanese candidate Anna Tanaka performed with cool poise and evenness of tone; and Louise Katharina Wehr, of Germany, demonstrated an intuitive grasp of the concerto’s dynamic shadings, although it was a shame her presence was not more dynamic.

The audience returned the following morning to hear five renditions of the Mendelssohn Concerto by the oldest finalists, aged 18 to 20. American Mimi Jung brought nice flourishes to rapid passages but suffered from choppy phrasing and failed to coordinate with the orchestra in the final movement. The performance that followed, by David Castro-Balbi, blew the audience away. Finally, here was a player who not only invested the music with technical polish and an authentic interpretation but who dared to make it his own. The 19-year-old Frenchman, in contrast to most of the players we heard, was not afraid to push his instrument toward an unconventional sound in order to achieve his dramatic ends, but he also nailed every rubato, and shaped melodies with a cantabile that, again, was sorely missing from other performances despite many an admirable tone quality. His pianissimo in the inner Andante was understated, yet managed to carry above the orchestra’s darkly intoned, well-phrased but often excessively loud playing. And he rode through the twittering motives of the final movement with great precision while also bringing a sense of spontaneity.

Eugene Chepovetsky, 18, from Latvia, also gave a moving performance with his sinuous lines and ability to bring out the bittersweet melancholy of Mendelssohn’s music. Japanese native Yoshie Okura offered a lovely if perfection-driven reading. Her awkward delays in the short reprise of the inner Andante failed to bring depth to a performance that otherwise stuck to its gleaming surface, although her final Allegro was nicely on point. Her compatriot, 20-year-old Reina Shibutani, swept through the yearning lines of the concerto with great stamina and brought a fresh edge to the final movement, but one couldn’t help but wonder if she was deliberately shooting histrionic facial expressions in the jury’s direction.

In the end Shibutani took second prize, Castro-Balbi won first and the award of the junior jury, and Chepovetsky came third. In the second division, Mierdl took first prize, Tanaka second and Csikos third; the all-female junior jurors, however, chose Tanaka. The results of the first division also yielded a discrepancy: while the main jury chose Wang for first prize, the younger delegation was swayed by Sueye Park, a 13-year-old Korean with a fine bowing arm and visible enjoyment of the spotlight, who came second. The charismatic He won third prize.

On the final evening all three first-prize winners and Park performed their concertos with the Staatskapelle Weimar; concerts and recitals in other parts of Germany and Austria are to follow. Although it was the winner of the oldest category who had the most to say musically, in an industry of growing speed and competition, perhaps certain skills can never be learnt too young.