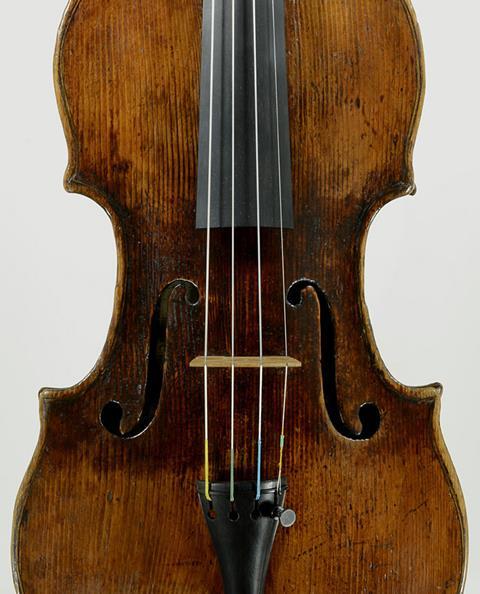 A violin maker and dealer based in La Chaux-de-Fonds, Switzerland, has identified the only known full-size violin by Zosimo Bergonzi (1724–79). Zosimo was the son of the great Cremonese luthier Carlo Bergonzi, and the brother of Michel Angelo Bergonzi. Up until now the only evidence of Zosimo's work was a mandolin dated 1790 and a child's violin with painted imitation purfling, dated 1775.

??The instrument was discovered in an auction last year by Fabrice Girardin, who has recently finished restoring it. 'When I received the violin, it had cracks on the table, pegbox and ribs,' said Girardin. 'The neck was broken and there was a bad soundpost crack across the back. The instrument was also very dirty.' Girardin, who has a passionate interest in Cremonese lutherie of the late 18th century and in the work of the Bergonzis in particular, said that as soon as he saw a photo of the instrument, he was certain that it was a Bergonzi family violin.

The original label led him to identify it as the work of Zosimo. Although the label carries the name of Carlo Bergonzi, the figure '75' (handwritten in ink that has transferred through the thin paper and into the wood underneath) was added after the preprinted digits '17', postdating Carlo's death by nearly 30 years. 'Zosimo continued to use the label of his father after his death, and also that of his brother, Michel Angelo, who died very young in 1758,' explained Girardin.??

The luthier was able to compare the violin with two violin moulds, inscribed with Zosimo's name, held in Cremona's Museo del Violino collection. He also noted that the violin's table, f-holes and wood were very similar to Zosimo's child's violin from the same year. A dendrochronological analysis of the top found that the latest tree ring dated to 1768, confirming that the violin could not be the work of Michel Angelo.??

Girardin acknowledged, however, that the violin bears similarities to Michel Angelo's instruments, particularly in the arching, and even more so to the work of Lorenzo Storioni. 'I have a 1777 Storioni that is very close in style,' he said. 'The Cremonese school of this era is very complicated, and this had led to issues with identification. I am sure, for example, that there are many instruments by Zosimo Bergonzi that have been misattributed to Storioni. And some violins attributed to Michel Angelo Bergonzi are very possibly the work of Zosimo.'