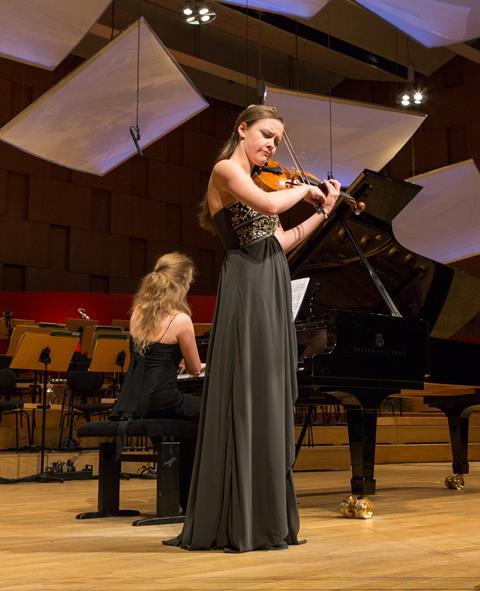 New research into how music competition performances are evaluated suggests that what judges see matters more than what they hear.

Scientists at University College London set out to test the general consensus that sound is the most important element in judging a musical performance. The findings were published in the Proceedings of the National Academy of Sciences, in a paper authored by Chia-Jung Tsay, a psychologist who trained as a pianist at the Juilliard School and the Peabody Conservatory.

In the study, 1,164 volunteers – a mixture of novices and professional musicians, some of whom had experience of judging competitions – were given recordings of the three finalists from ten major international competitions for violinists and pianists. The contests included the Tchaikovksy Competition and the Joseph Joachim International Violin Competition in Hanover, which was won in 2012 by Alexandra Conunova-Dumortier (pictured). Some of the recordings were video-only, some were sound-only, and others were video plus sound.

The participants were then asked to pick the winners. Only 25.7 per cent of expert musicians were able to identify the actual winners through sound alone – a figure below the 33 per cent that they might have been expected to do so by chance. When given video-plus-sound recordings, the experts did only slightly better, with 29.5 per cent choosing correctly. But the experts who watched video-only clips performed best of all, with 47 per cent identifying the actual winners.

Tsay said that many of the participants were surprised by their own results, and that experts in particular said that they had lacked confidence in their judgements when presented with video-only recordings. 'Later on, when I was able to tell them that they were better at guessing the actual outcomes with just the video, there was some surprise and amusement.'

She concluded in the paper that the results suggest that 'visual cues are indeed persuasive and sway judges away from recognising the best performance that they themselves have, by consensus, defined as dependent on sound. Professional judgement appears to be made with little conscious awareness that visual cues factor so heavily into preferences and decisions.'

Does she think that competition judges should be actively directed to give more emphasis to sound than visuals when making their judgements? 'In the end,' she said, 'when judges are confronted with hours and hours of performance, even if they were originally instructed to evaluate in a certain way, it's probably natural for them to have a more holistic assessment, and that type of assessment is very visually informed.'

You can try the experiment for yourself by comparing the clips below of two violin competition finalists.