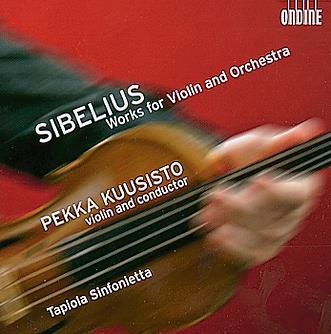 Sibelius’s reputation reached its apex in the 1930s, when the distinguished English musicologist Julius Harrison went as far as to claim that ‘Sibelius is the one recognised by cultured musicians as the most fitting successor to the immortal Brahms.’ If one limits the points of reference to the symphonies, later tone poems, Violin Concerto and ‘Voces intimae’ String Quartet, then fair enough, but we now have a far broader picture of Sibelius’s output as a whole, which includes vast swathes of salonesque piano music. It’s an incredibly complex overall picture that is now emerging, one that Pekka Kuusisto’s searching interpretations of these still highly underrated scores makes all too plain.

In the past – as witness Salvatore Accardo’s account for Philips – the Humoresques were treated as musical chips off the Violin Concerto’s block. Yet, as Leonidis Kavakos (Finlandia) and Christian Tetzlaff (Virgin) have more recently demonstrated, these at times rather strange and intangible pieces don’t really belong to the mainstream Romantic tradition at all. Pekka Kuusisto takes this process one stage further by aligning the music’s unpredictability and avoidance of rhetoric with the tonal precipices of Schoenberg’s pre-Expressionist period. Rather than taking the music at face value, Kuusisto reveals its complex layers of nostalgic longing and tantalising juxtapositions of the old and the new. Every gesture (soloistic and orchestral) has been re-examined, making the listener experience this music afresh. By the end you’re left wondering whether Sibelius was a post-ironic Modernist. Be that as it may, this stunningly engineered set of performances sets new standards in this repertory.