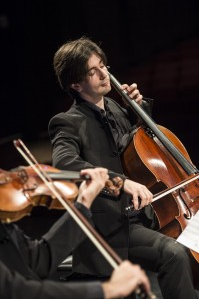 Researchers from the UK’s Royal Academy of Music (RAM) and University of Birmingham and the University of Münster in Germany say they have discovered a way of analysing how musicians in a string quartet stay in time.

Musicians in a conductorless group continuously make millisecond timing corrections to stay together. The team of scientists found that by examining how each musician made these adjustments, conclusions could be drawn as to whether or not a group was autocratic, where the musicians followed a single leader, or democratic, where corrections were made equally across the group.

In the study, published in the Journal of the Royal Society Interface, two unidentified established string quartets were invited in turn to play 48 beats (bars 12–24) of the fourth movement of Haydn’s String Quartet op.74 no.1. Spot microphones were attached to each instrument under the strings close to the bridge to pick up the sound from each player. Time series analysis software allowed the researchers to examine variations in the players’ timing to one thousandth of a second, and note how each player corrected their timing to the rest of the group.

‘On a given note we looked at the asynchrony between a given pair of players, then looked at what happened on the next note,’ said co-author Adrian Bradbury of the RAM. ‘If a player had tried to correct the asynchrony, by catching up or by waiting, we gave them a high correction strength – they were more of a follower. If a player allowed the others to adjust to them, their correction strength was deemed low – they were more of a leader.’

The team found that the quartets employed different strategies to achieve synchrony. ‘In one quartet the players all had similar correction strengths – synchrony was maintained through democracy. But in the other the first violin had a low correction strength, with the other players having to follow her,’ said Bradbury. ‘These different strategies would project different characters – I'm sure longer excerpts would show that the hierarchy was fluid, used as an interpretative tool to highlight the shifting drama in a musical score.’

Lead author, professor Alan Wing from the University of Birmingham, said the hierarchy in the autocratic quartet could be explained by the fact that in the excerpt the first violin carries the melody. He also pointed out other factors that could have affected the findings: ‘The fact that one quartet has been together longer, that they’re from different countries, how well they knew the music, whether they were playing the excerpt in or out of context – all these factors come into play.’

Wing said that while it would be difficult to draw conclusions from two case-studies, the project represents a methodological step forward: ‘So far we have looked at expert players, but it would be interesting now to take this research into the field of music education, to see how a newly-formed student quartet develops their timing over the course of a year.’

The authors now want to examine the way audiences react to hierarchies within a group, whether it affects their enjoyment of a performance, and how musicians playing music of other genres approach timing.

To view the musical excerpt and a diagram showing the timing adjustments within each string quartet, click on the PDF below.