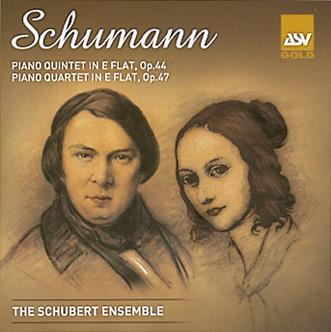 It is the immaculate recorded balance between piano and strings that sets this disc apart from many others, for despite being a prime requirement, this has been the drawback of many eminently recommendable performances.

The opening of the Piano Quintet does not here ask to command our attention, and though there is sufficient impact as the movement progresses, this is essentially a lyrical account of the work as a whole. That is particularly the case in the way Jane Salmon avoids overstating the cello’s many solo moments; however, Douglas Paterson’s viola introduces an unusual degree of sadness in the expansive approach to the opening of the second movement. The following Scherzo, taken quite quickly, makes an ideal foil to an unhurried finale.

By contrast the Piano Quartet’s opening flourish is quite dramatic before it too settles back to a more gentle approach – the third movement is quite song-like in its long phrases. Maybe the ensemble should have held the final section of the concluding movement in check, since here the playing sounds rather too overheated in the general context of the performance.

These are two readings that command respect, with William Howard bringing his long experience to the piano part, while his younger colleagues add playing of impeccable intonation and a most pleasing silvery quality. But it is the fiery, spontaneous and at times highly personal view of both works from Martha Argerich and a group of friends recorded live for EMI in 1994 that continues to rivet my attention, and remains my first choice.