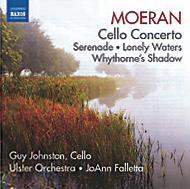 Vol.3 of Paul and Huw Watkins’s British Cello and Piano series takes us to the years of austerity immediately after World War II. Watkins is the ideal cellist for this repertoire, exploring its meandering paths with integrity and sensitive to its haunting beauty and generally subdued mood.

Moeran’s offering, written for his wife, British cellist Peers Coetmore, is the most lyrical, with abundant echoes of his folk song collecting, evocatively played. The brothers enter energetically into the rhythmic battery that opens the final movement, and Watkins’s c.1730 Montagnana and Gofriller cello sounds richly resonant in the triple- and double-stopping solo passage near the end.

Watkins plays the yearning, arching lines of Rubbra’s more tightly structured sonata with intense feeling, but it is the large-scale theme and variations movement with slow fugue that is really striking. The intensity with which the fugue builds to its climax, the cello climbing higher and higher, is truly powerful.

The sonata by Rawsthorne, a cellist himself, is one of his more personal, introspective works. After a sombre solo piano opening the brothers together create a magical atmosphere for the central Adagio, in the high, spread piano chords and muted cello melody. An interesting disc, sensitively recorded.