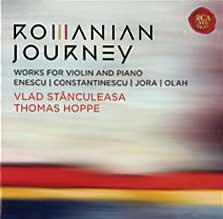 Violin pedagogue George Enescu was a linchpin in generating international recognition for his country’s native music, largely through his own compositions. Here we find the lush and rhapsodic style of his Impromptu concertant (1903) being replaced with a sense of Messiaen by the time of the 1940 suite Impressions d’enfance, followed eleven years later by the world of the Second Viennese School in the Andantino malinconico.

Born ten years after Enescu in 1891, Mihail Jora began to shape the nationalist movement through his teaching, though his own music, as evidenced by Suita mica from 1917, was more in tune with west-European modernity. It is not until we reach the Sonatina of 1933 by his pupil Paul Constantinescu, that we find the use of folk music, an influence that totally contrasts with the cutting-edge modernity of Tiberiu Olah’s Sonatina, written 20 years later in 1953.

The technical brilliance of the young Romanian violinist Vlad Stanculeasa is never in doubt in this very demanding programme – his picture-painting in the Impressions d’enfance, in particular, is both subtle and brilliant. A warm tonal quality, born out of a wide vibrato, perfectly captures Constantinescu’s gypsy element, though it does go some way in smoothing down Olah’s acerbic moments.

With the violin closely recorded, the excellent partnership with Thomas Hoppe has the piano placed in a more resonant ambiance.