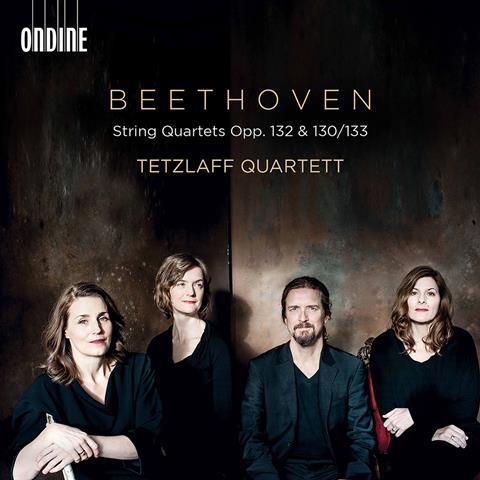 As these quartets are presented in chronological order, the A minor op.132 precedes the B flat major op.130. The opening movement gives a taster of the qualities to come in both works. In the Assai sostenuto there is intensity, a sense of unfolding mystery, of exploration and wonder; the Allegro mixes vigour with delicacy, moving from dynamic impetus to limpid phrasing in an instant. A great range of both colour and character underpins and illuminates Beethoven’s structures and musical logic. In the Allegro ma non tanto, elegantly shaped phrases pass conversationally. The opening of the third-movement Molto adagio is fragile, its phrases woven seamlessly together, and each recurrence is more rapt than the last. The Alla marcia has passages of bright song, and the Allegro appassionato is full of vivid dynamic contrasts.

For the B flat major Quartet Tetzlaff and his comrades follow Beethoven’s original plan and end with the Grosse Fuge. There is tremendous drama in the first movement, generated through close observance to Beethoven’s dynamics and many sforzandos. In the Presto there is lightness and vitality, and the composer’s delicate, filigree writing in the Andante con moto is laid out with exemplary textural clarity. After the graceful Alla danza tedesca, the Cavatina has a timeless profundity. Even where the Grosse Fuge is at its most fiery and severe, the tone is always clean; it is formidable but never hectoring or relentless, and the final crescendo has an irresistible compulsion. These are seriously good performances, recorded in a warm, resonant acoustic.