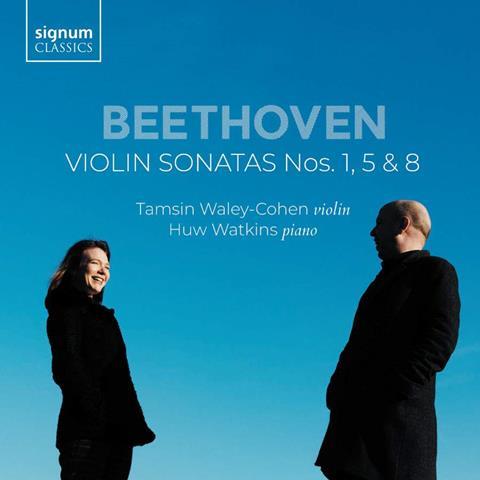 Description: A mixed bag of Beethoven in the first instalment of a cycle

Tamsin Waley-Cohen and composer/pianist Huw Watkins have worked together on a number of CD projects but this release marks the first in a cycle of Beethoven sonatas for Signum.

For me, the D major and F major sonatas especially are fairly disappointing. Waley-Cohen’s playing is often unforthcoming, with a resistance to vibrato that has the effect of sounding muted yet not convincing enough if the idea was to create intimacy. By contrast, there’s an occasional misjudged barking edge in multiple-stopped chords. The dynamic range feels limited, sforzandos underplayed and there’s generally a lack of verve and spirit. Perhaps a more lively acoustic, or a more vibrant recording treatment, could have helped but that would be asking the accessories to save the outfit.

The G major Sonata comes out best, with decent momentum – as well as a sense of dramatic capriciousness – in the first movement. The minuet swings along nicely with smiling grace, although even here there’s a determined rejection of long-range lyricism – there may be a singer singer waiting to emerge from this performance, but they are either physically unable or mentally unready.

The finale has a refreshing sense of outdoor rustique as well as a quicksilver touch. Otherwise, on the whole, this disc doesn’t inspire great anticipation for the next instalment.