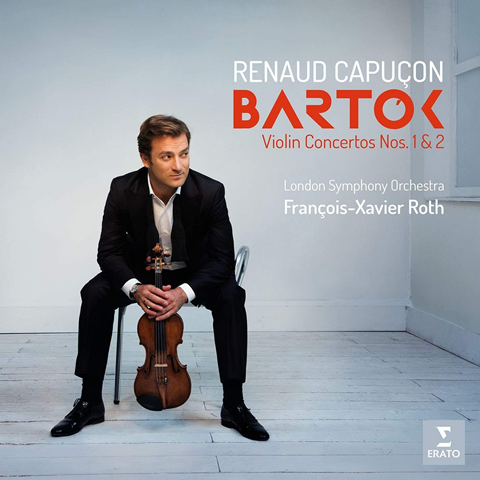 Hot on the heels of Christian Tetzlaff’s Bartók concertos come Renaud Capuçon’s. As one might expect, this French team’s performances with the London Symphony Orchestra are far more concerned with beauty than are the German’s with the Finnish Radio Symphony and Hannu Lintu.

Capuçon’s sound, like a ribbon of velvet, offers a psychedelic rather than hard-edged view of the Second Concerto and there are moments, such as the upward scale in the first movement at 2’37”, that he makes his own. His un-histrionic approach also pays dividends in the final movement, which builds from those middle-ground foundations into true fervour. Capuçon’s sweet tone is even better suited to the love-letter First Concerto, where his leaning into the arching phrases at 4’30” in the Andante is but one delicious feature.

Roth and the LSO are with him there, but they can’t match Gianandrea Noseda (for James Ehnes, reviewed January 2011) in the concerto’s moment of reckoning from 7’28” in the Allegro giocoso. Which leads to two reservations on an otherwise beautiful disc: the boomy orchestral sound fits Capuçon’s less edgy view of both pieces but can feel woolly, and for an approach concerned with beauty, the violinist doesn’t tune the cadenzas and double-stopped passages as well as Ehnes. In both pieces Ehnes has the edge, and he also offers the Viola Concerto.