Charming quartets from a youthful composer who became known for opera 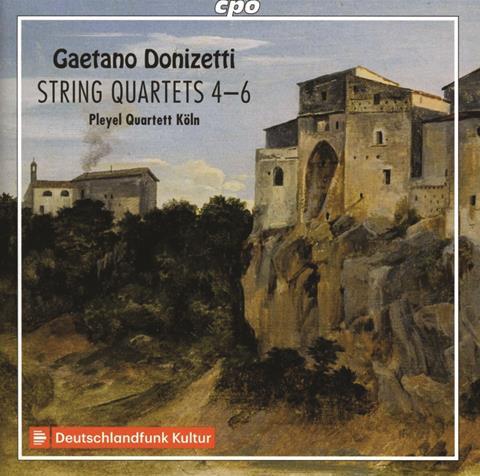 Description: Charming quartets from a youthful composer who became known for opera

Commenced by The Revolutionary Drawing Room in 1996, CPO’s Donizetti string quartet cycle is here completed by the period-instrument Pleyel Quartet. Composed c.1818, these charming, experimental juvenilia were destined for domestic quartet parties at the Bergamo residence of Alessandro Bertoli. Modelled on Haydn’s legacy they incorporate some unorthodox formal ideas, notably the expanded recapitulation of no.4’s first movement and the recall of the first movement’s opening idea to close no.5’s finale, but the quality of inspiration in some movements barely rises above mediocrity.

Renowned for its violinists sharing of the leader’s role (Ingeborg Scheerer in no.4 and Milena Schuster in nos.5 and 6), this ensemble performs with its usual homogeneity of tone and attack in accurate, if somewhat cautious accounts. Tempos for the outer movements of no.4 and the Presto Minuetto of no.5 seem steady and lacking in vitality and the performances overall require greater flair and expressive detail fully to sustain the interest. Nevertheless, noteworthy moments include no.4’s skilfully dispatched col legno Trio, the characterful Ländler-like Trio of no.5 and the clearly articulated contrapuntal interest in its finale, and the idyllic Larghetto of no.6 and Josèphe Cottet’s prominent viola role in the ensuing Trio. The recording is bright, clear and resonant.