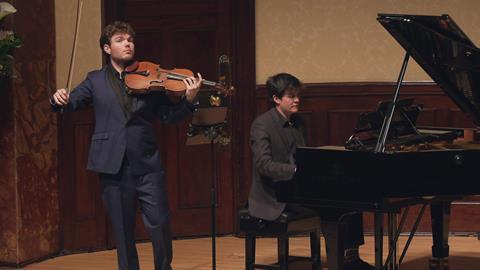 All the composers represented in this concert were viola players, of which the earliest, William Flackton, may well have written the first English music for viola. His C minor Sonata of 1770 is firmly set in Baroque soil, with four movements alternating slow and fast. Ridout, gentle in the opening Adagio, danced through the Allegro Moderato with clean staccato playing and burst into vigorous life in the final Minuetto. He soared at the centre of Cecil Forsyth’s Chanson Celtique, and was suitably melancholic in Vaughan Williams’s Six Studies in English Folk Song before dashing off the jolly final number with élan – after which his shoulder rest fell off.

The Waltz from Britten’s Suite for violin and piano (arranged, like the previous work, by the composer) was Ridout’s first chance to demonstrate his virtuosic flair, rattling off double-stops and down-bow spiccato with theatrical timing and a leavening of humour.

The major work here was Rebecca Clarke’s Sonata. Ridout and Baillieu took the opening Impetuoso instruction seriously, playing with drive and rhythmic flexibility, which lent Ridout’s playing a feeling of improvisation as he moved through Clarke’s shifting emotional landscape. The Vivace was feather-light, there was tender, pliant lyricism in the Adagio, and Ridout let rip with power and joy in the finale. Baillieu, too, was superb.