Bruce Hodges hears a marathon concert series of all the composer’s string quartets, taking place at various locations on 1, 4, 5, 9, 11 and 12 June 2021 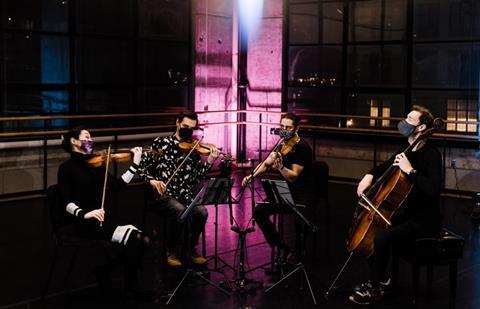 One of the most welcome distractions of 2021 has been the Tesla Quartet’s exploration of Bartók’s magnificent contributions to the genre. Filmed over a period of months, the group included rehearsals for each of the six quartets, plus separate discussions with experts such as Dániel Péter Biró (composer and professor), Dániel Hamar (founder of Muzsikás), and violinists Nicholas Kitchen and Mark Steinberg.

Live performances followed at the Baryshnikov Arts Center in New York (Quartets 1, 2, and 3), with the final three at the Brooklyn Melodies Music Center. At the time of going to press, recordings of all 18 sessions were on YouTube (bit.ly/36BVUqI). In comments about the Fifth, Károly Schranz – founding second violinist of the Takács Quartet – mentioned going to Banff in 1981. There he studied Bartók with Zoltán Székely, violinist of the Hungarian Quartet, whose bragging rights included working directly with the composer. As a preface to the Sixth, composer Gabriela Lena Frank discussed Bartók’s influence on her work. She spoke about the relationship between his music and indigenous works from Latin America. His compositional choices inspired her: ‘Seemingly impossible, unidiomatic things on the piano became idiomatic.’

For both quartets, open rehearsals – at the Flatbush apartment of violinist Michelle Lie – proved to be insightful glimpses into a process that many listeners rarely experience. Another point clearly made: the spirit of collaboration, as each of the four players jumped in with suggestions. Among dozens of issues, conversation covered use of tone and when to diverge into four unique components – and when to unify as one. Other comments centred on melodic emphasis and its relationship to rhythm. Even seemingly mundane concerns, such as whether or not to use a metronome, made their way into the mix. I can’t imagine that other musicians exploring this repertoire would not find these rehearsal hours enlightening, and a way of ultimately approaching these complex works with more confidence.

When performance times arrived (at the Brooklyn Melodies Music School), the group adroitly captured the Fifth’s acerbic contrasts. From the pulsating energy of the first movement, to the lazy trills that end the second, to the sinuous, increasingly torrid lines of the third – the ensemble had clearly given the work untold hours of study. In the shifting moods of the Andante, the group seemed most confident – but then came the scurrying force of the finale.

Violinist Ross Snyder offered an engaging introduction to the Sixth, before Edwin Kaplan’s soulful viola set the mood in the initial Mesto, with its predominant melancholy. His colleagues swooped in with artful filigree and a bit of sass, but ultimately the composer’s desolation held sway. Cellist Serafim Smigelskiy opened the second movement with appropriate gravitas, until the insouciant march that follows tried (unsuccessfully) to disrupt the haze. For the third movement, Snyder set the pace that led to the vinegary Burletta. And then came the final sombre Mesto, delivered with appropriate reverence, perhaps implying questions that cannot possibly be answered.