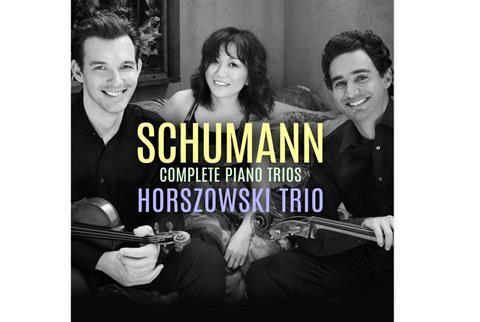 First, some words of praise for how closely the Horszowski Trio follows Schumann’s tempo and expressive markings. In the opening movement of the D minor Trio (no.1), for example, where one has come to expect relaxations of tempo for the brief second subject and the magical section in the development section led by pulsating pianississimo piano triplets, the Horszowskis keep the music flowing serenely. This combined with an attractive airy textural clarity, despite the music’s middle-register dominance, imparts a litheness and freshness to the entire series that avoids the slightly cosy, relaxed quality that this glorious music sometimes inspires.

This has a particularly uplifting effect in the F major Trio (no.2), which dances along in the outer movements with an exhilarating, Mendelssohnian deftness of touch. The Horszowski Trio’s gently poetic, chamber-scale inflecting of Schumann’s slow movements perhaps lacks a certain furrowed-brow gravitas, yet in the context of the readings as a whole they feel entirely appropriate. The trio’s refusal to gild the lily indulgently proves particularly effective in the op. 88 Fantasiestücke, in which Schumann distils his creative essence (most memorably in the opening Romanze) into the most heartrendingly simple gestures.

The recording, captured in New York’s American Academy of Arts and Letters, is as well balanced and truthful as the performances are themselves.