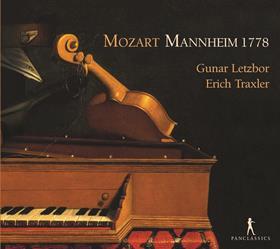 This recording of Mozart’s Mannheim violin sonatas has the hallmarks of period performance, with harpsichord instead of even fortepiano, and Letzbor using vibrato sparingly. But things quickly start to go awry. These are written to be for ‘Klavier und Violine’, and yet violin is front and centre in the recording. In the first movement of the G major Sonata KV301, where the instruments are in 3rds with the harpsichord on top, the keyboard is all but inaudible. In too many places where the violin has an accompanying role, playing an arpeggio figure or repeated notes, Letzbor simply drowns out the harpsichord. Then there is the matter of repeats. They pay no heed to them in first movements, and observe them inconsistently elsewhere. Then, in the second movement of KV302, they put in some extra ones.

Sometimes Letzbor plays with beauty and elegance, as in the floating minor section of the KV301 Allegro (where they observe both repeats). The fast sections of the C major Sonata KV303 dance along nicely, but in the second movement, after the gentle harpsichord opening, Letzbor enters with a ferocity which knocks you back, even though the keyboard still has the melodic interest.