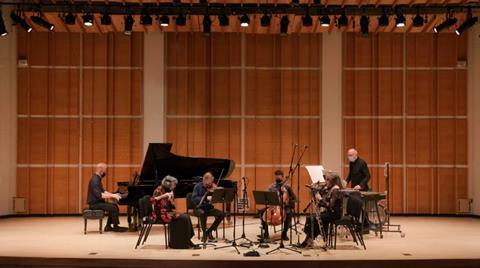 The Da Capo Chamber Players, an ensemble that celebrates its 50th anniversary this year, ended the season with works especially written for it. Its line-up of flute, clarinet, violin, cello and piano is inspired by Schoenberg’s instrumentation for Pierrot lunaire, and the group’s celebrated musicians include two string players with Juilliard pedigrees: violinist Curtis Macomber and cellist Christopher Gross.

In Shen Yiwen’s Guo Shang: Hymn to the Fallen and Li Hun: Recessional (2008), the string duo echoed the piano’s thumping lower registers with their own grinding textures, as Macomber floated a melodic line fashioned from traditional Chinese scales. Li Hun began with a flurry of string pizzicatos, joined by flute (Patricia Spencer) and clarinet (Marianne Gythfeldt) in a playful mood.

Composer Bruce Adolphe introduced the world premiere of Portraits (2021), inspired by musicians he admires. Macomber and Gross were especially engaging in the jazz-inflected tribute to Milton Babbitt.

A founding member of the group, Joan Tower, wrote Looking Back (2018) in honour of André Emilianoff, the group’s cellist from 1976 to 2011. Amid Tower’s savage rhythms, Gross was particularly luminous in the stirring cello writing near the end.