Leah Hollingsworth reports on ’Musical Storefronts’, an innovative way of performing during the pandemic, in New York on 5 February 2021 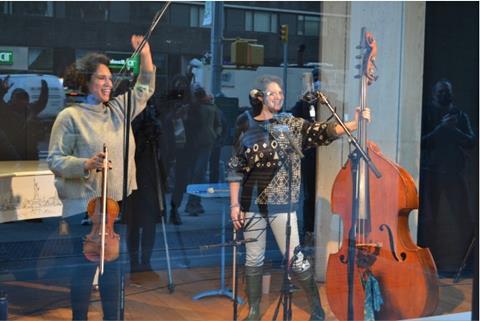 The brainchild of the Kaufman Music Center, the Musical Storefronts series presented concerts in February and March 2021 in New York City with performers playing inside, behind a plate-glass storefront, with the music brought to audience members outside on the sidewalk via high-quality microphones and Bose speakers. The performers were able to announce their selections in real-time and even joke with the audience, who responded with clapping, thumbs-up and various forms of body and sign language.

Big dog little dog is composer–violinist Jessie Montgomery and songwriter–double bassist Eleonore Oppenheim, both New York City natives, and they performed music from their debut album to an eager and eclectic audience – some passers-by lingered for a song or two while others remained for the entire performance. Every age was represented, from babies in strollers, youngsters with helmets and scooters, graduate students and the elderly. Each selection was immediately compelling, whether because of the beauty and expansiveness evoked by bass drones and violin double-stops in Panorama or the fascination in watching Montgomery ‘play’ the violin col legno-style entirely with a mechanical pencil in Sypher.

The works evoked a sense of meditation, a strange mix of introspection and inclusion. Many used extended techniques (such as the mechanical pencil), but each was accessible and easy to listen to, with a strong groove and a distinctly Americana feel. Ice seemed to echo the passing sirens of New York City with its double-stopped descending glissandos in the violin over bass harmonics. Ultraviolet was reminiscent of Bach or Ysaÿe, and was deeply beautiful, and felt like the kind of musical experience we are all craving: intensely intimate, but also shared and communal.