Book review: A Quintessential Quartet: The Story of the Lindsay String Quartet

Tully Potter reviews an account of the famed British foursome, penned by its cellist

A Quintessential Quartet: The Story of the Lindsay String Quartet

One of the best British cellists of his generation, Bernard Gregor-Smith was an impressive presence at the front of the Lindsay Quartet for 40 years. Almost too impressive – with the mercurial genius Peter Cropper sitting opposite in the first violin chair, the inner parts were in danger of being swamped. But the ‘Lindsays’ were hard to ignore and on their day, could be truly inspiring.

There was cello in the young Bernard Smith’s background – his great-great-great-grandmother Jane Gregor played – but he started on the piano. His father Bill made violins and presumably also the little cello that Bernard tried out, aged nine, grinding out Happy Birthday at his first attempt. He had found his life’s path, and eventually won a scholarship to the Royal Academy of Music.

Forming the Alexis Quartet was violist Roger Bigley’s idea and he recruited Gregor-Smith first. Cropper was second violinist when they first performed at the RAM in 1965. Resident at Keele University from 1967, they briefly became the Cropper Quartet, as he was now leader, then in 1970 the Lindsay Quartet. The following year the famous line-up took shape when Ronald Birks took over as second violinist. From the start they specialised in Beethoven and Bartók, helped by two members of the Hungarian Quartet, former second violin Alexandre Moskowsky and leader Zoltán Székely, and Rudolf Kolisch, former leader of the Kolisch Quartet. The public came to associate them above all with Beethoven. ‘Increasingly, the late quartets were deeply appreciated by us,’ Gregor-Smith writes. ‘We were growing into them with a greater understanding, they were a living miracle and made our lives of playing them extremely satisfying and worth the great effort.’ They also became very close to Michael Tippett, giving definitive performances of his works, and in due course performed and recorded all of Haydn’s quartets as well as a number of Czech and Classical pieces.

Gregor-Smith’s narrative is hard to follow, as his mind darts from one topic to the next, but we pick up a lot of what it takes to become, and remain, a ‘quintessential’ quartet. Amazing characters pass through these pages, none more extraordinary than the Polish pianist–composer André Tchaikowsky. One chapter is devoted to Peter Cropper, whose decision to withdraw in 2005 obviously came too early for his colleagues and Gregor-Smith played in two other ensembles, notably the Dante Quartet for seven years. He has gone through three marriages, producing four children, and has turned more and more to jazz. He is inclined to throw a poem into his text, and we learn that in retirement he and his fourth wife live in Spain, where he loves cultivating plants and fruit trees. It has been a multifarious life, reflecting a many-sided character. 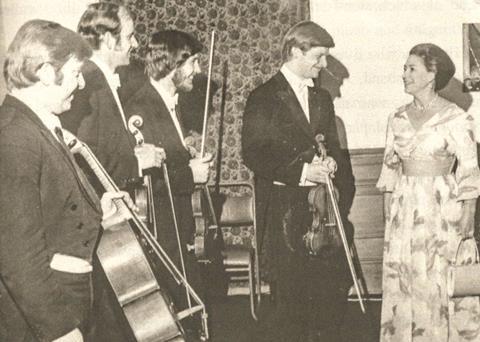