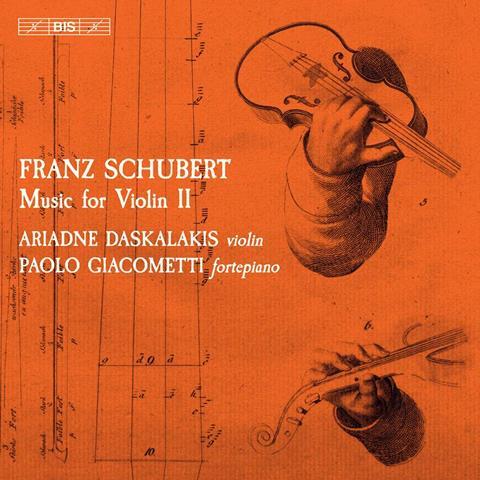 Description: The second and final instalment of period-instrument Schubert is a delight

The 19th-century vibrato–cantabile tradition was once so prevalent that no matter what music one was playing, teachers would be on the lookout for the dreaded ‘still’ left hand. Even before the bow made contact with the instrument, it was widely considered good practice to get the left-hand vibrating in advance and keep it going beyond the end of each phrase, even when the bow had been lifted away. I mention this because even when played with such exquisite control and subtlety as by Ariadne Daskalakis, those of us of a certain age might still recall cries of ‘Vibrato, vibrato, vibrato!’ when experiencing the crystal-clear opening phrases of the ever-popular D major Sonata D384.

This is the interpretative-stylistic key that unlocks the door to this second (final) instalment in Schubert’s complete works for violin and keyboard. Rather than anachronistically treating these magical scores as embryonic Brahms or Franck, Daskalakis and Paolo Giacometti trace the music back to its Mozartian origins. As a result, one is more aware than usual of Schubert gently pushing the instruments of the period towards new expressive horizons. At virtually every turn the ear registers differences in balance, projection, tone, articulation, colour and (of course) vibrato when compared with performances on a modern set-up. The performers’ velvety, gently cushioned sound world is matched by radiant engineering that creates the beguiling impression of salon intimacy.