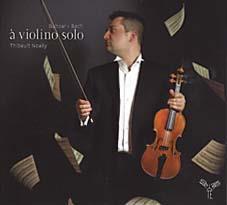 Thibault Noally’s unpretentious period-instrument accounts of unaccompanied works by
six 17th- and 18th-century German polyphonists display technical command and communicative musicianship. Baltzar’s brief Praeludium and an Allemande with testing string-crossings are characterfully dispatched, along with the eight charming movements of Vilsmayr’s
Fifth Partita (from his Artificiosus concentus pro camera). In the latter’s final Retirada and in the four movements of Westhoff’s Fifth Suite, Noally skilfully differentiates the various voices in sensitively shaped interpretations.

He also makes effective use of rubato to emphasise phrasing in Biber’s Passacaglia, even if his sudden variations of pulse sometimes feel unnerving. His fairly traditional, middle-of-the-road reading of Bach’s Second Partita includes an expansive Sarabanda, a buoyant Giga with a few rough edges, and an unhurried, well-graduated Ciaccona, which demonstrates clear understanding of the balance of internal strands and varied and euphonious execution of the densest polyphonic passages.

Noally also sustains a well-punctuated, intelligent dialogue through counterpoint in four of Telemann’s fantasias, particularly in the fugato movements of nos.2 and 10. His phrasal individuality, additional ornamentation and general stylistic awareness make a strong impression and he showcases these works’ folk music elements with aplomb, particularly in the Vivace of no.12. The artfully contrived recording is strikingly upfront and unnaturally reverberant.