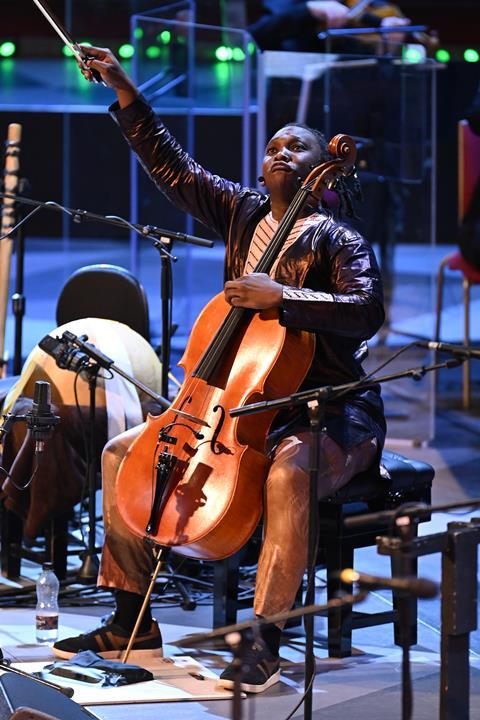 The following extract is from The Strad’s December 2021 issue feature ‘Abel Selaocoe: Uniting Voice’. To read it in full, click here  to subscribe and login. The December 2021 digital magazine and print edition  are on sale now

‘It all began with my brother, who was playing music way before I really got interested,’ Selaocoe says. ‘He would bring together people from the church, the brass band, whatever, and write music for them.’ Selaocoe followed his brother to a music school in Soweto, run by the African Cultural Organisation of South Africa (Acosa). ‘It was an outreach project that got us out of the township for the weekend. The teachers were amazing; they had so much knowledge to share, but didn’t really have any resources.’ Like his brother, a bassoonist, Selaocoe started out on the recorder. His musical talent was obvious, and when he was eleven, the school suggested he take up the cello. ‘I started going to a class on Saturday where we would all share one or two cellos. I was already obsessed, learning anything I could that had a bass clef.’ Next came a cello of his own, though not without a new sense of responsibility. ‘No one else in the class was given that opportunity, so it was on me to make use of it – not to go out and play with my friends, but to practise the cello.

‘Through music we began to meet people whose lives were very different from ours, and it dawned on us that this was our way into another world. From then on it was a case of making the best for ourselves.’ Back in Sebokeng, Selaocoe’s abilities did not go unnoticed, even if his instrument remained something of a mystery. ‘In the township, whatever the occasion was, I’d be there playing the cello. People didn’t think of me as a classical cellist, or even as a cellist at all. I was just the kid who could play that thing. They’d bring me along and I’d have to make something work. It’s just a box, after all. We didn’t grow up with classical music, so playing the cello was just another way of joining in with the culture we did have.’

Despite the blurred musical boundaries of his early years, was Selaocoe ever tempted to become a mainstream classical cellist? ‘Absolutely!’ he says. ‘One hundred per cent!’ In 2010, Selaocoe won another scholarship, this time to the Royal Northern College of Music (RNCM) in Manchester, where the high standard of playing encouraged him to push his technical and interpretative abilities. But, he says, there was always another side to his music making. ‘When I arrived in Manchester, I was pretty sure my path was going to be that of a typical concert cellist, but as time went on my deep ancestral memory of other musics just wouldn’t go away. I couldn’t leave it behind.’ Selaocoe’s teacher in Manchester was Hannah Roberts, a former student of William Pleeth and Ralph Kirshbaum who encouraged him to follow his own path. ‘I was so lucky to have her,’ Selaocoe says. ‘She gave me a rigorous technical training and I studied all the usual classical repertoire with her, but she also told me to find my essence.’

At the RNCM, Selaocoe continued to explore folk music and other non-classical styles of string playing. ‘You have to follow what it is you really want to do,’ he says. ‘You might not be the new Rostropovich, but you’re becoming an elevated version of yourself, which is quite enough for the world to digest.’