American-born Fodor counted among his teachers not only Heifetz, but also Ivan Galamian and Josef Gingold 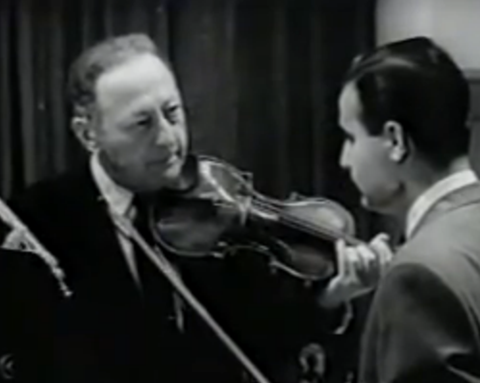 Eugene Fodor, who died in 2011, counted among his teachers not only Ivan Galamian and Joseph Gingold, but also Jascha Heifetz. He took first prize in the Paganini Competition in 1972 and then made history by entering and winning second prize (no first was awarded) at the Tchaikovsky Competition in Moscow in 1974, at a time when relations between the USSR and the USA were particularly strained.

He remembered his lessons with Heifetz below:

'The first day I met Heifetz I felt so drawn to him - it was an eerie kind of feeling. The shape of his head, his ears, his forehead - it sounds silly - but they were almost identical to my uncle John's! It was weird - you see someone you've revered all your life, and then you meet them, and feel like you're seeing family.

When he invited me to his house and I played for him, I was quite relaxed, and I played well. He was really very nice to me that day and invited me to join his class on a full scholarship. I always felt his closeness the entire time I was with him.

Heifetz had a marvellous sense of humour. There was always a lightness, a boyishness, underneath the grim exterior. I was never intimidated because I could feel the lightness bubbling up. It was one of the most enjoyable years of my life.

My studies with Heifetz were an affirmation of the principles of solid technique, discipline and preparation that I'd adopted early in life, partly as a result of his inspiration through recordings. Having studied the mechanisms of his left and right hands, I tried to adopt his technical style of playing, at least in principle.

Especially in concerts, with the electricity of people listening, I enjoy being very focused. I don't swerve and swing around on stage because it detracts from the important principle of balance on which violin playing depends. The weight of the bow is measured in terms of grams and half grams - it's that subtle. When one tilts the angle of the violin, the weight of the upper half of the bow is changed dramatically. You have to readjust the balance of the bow to whatever motions the violin is going through. I'm surprised that so often students don't realise that attacks of the bow should be coordinated with the violin held still.

That's how Heifetz was able to play with such perfection - it's the motionless left arm that's essential to consistent technical accuracy. It also affects musical concentration - not to mention the distraction for the audience if someone is constantly swerving from side to side.

Bow control is closely related to this steadiness. The player should keep the right thumb bent, the fingers somewhat curved, and the elbow low and relaxed. Allowing the fingers to remain curved at all times gives greater elasticity to bow changes and allows the hair to be angled for pianissimo or flattened for stronger strokes. It also assists in producing a smooth sound when playing low on the bow, giving more power without sounding rough.

This article was published in The Strad's July 1994 issue.