The Dover Quartet on the idea of the ‘hypermetre’ 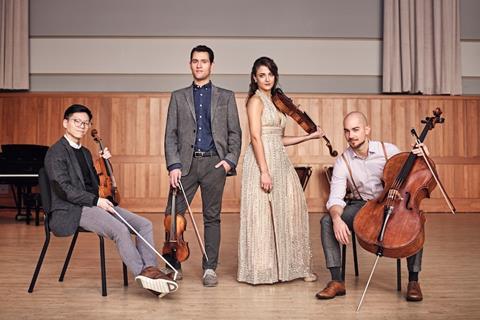 If there’s one idea – or ‘gospel’ as violinist Joel Link jokingly describes it – that the quartet try to pass to their younger charges, it’s the idea of ‘hypermetre’, a concept they picked up from Ashkenasi during their own studies, and something that is not often taught or discussed in musical circles. ‘This is a central philosophy of our group that has become more important as we have grown older,’ shares cellist Camden Shaw. ‘Once someone points it out to you, you can’t stop thinking about it. It has to do with dividing lengths of musical time into strong or weak periods that undulate, just like a sound vibration. It happens across a number of different dimensions simultaneously – most people manage it reasonably well over the smaller time spaces, but are less successful at the broader level.’

Read: ‘You’re never truly ready, but at a certain point you just have to dive in and do it,’ – Dover Quartet on recording Beethoven

Watch: Bravo! Vail’s Inside the Music with the Dover Quartet

‘It’s similar to the hierarchy in an average 4/4 bar, in terms of which beat is the strongest and which is weaker,’ adds violist Milena Pajaro-van de Stadt. ‘So, one beat will have a more downward feel to it and another beat will have a leading feel. It’s the same concept but rather than dealing with a single bar, it’s within a phrase.’

‘It works on so many levels, so that all of the music is vibrating,’ enthuses Shaw. ‘So, for example, Mozart might have a hypermetre of twelve bars, and usually he will assign three bars to each hypermetre beat, but then in the next twelve bars he might switch things so that the new hypermetre beat will be four bars instead of three. If you don’t pay attention you might phrase something a little backwards, or simply not notice the brilliance of how he achieved the result.’