Teaching a stringed instrument you have never played before

What do you do if you're asked to teach a stringed instrument that isn't the one you play? ‘Don't panic!' That's the first rule, according to the experts that Ariane Todes asked 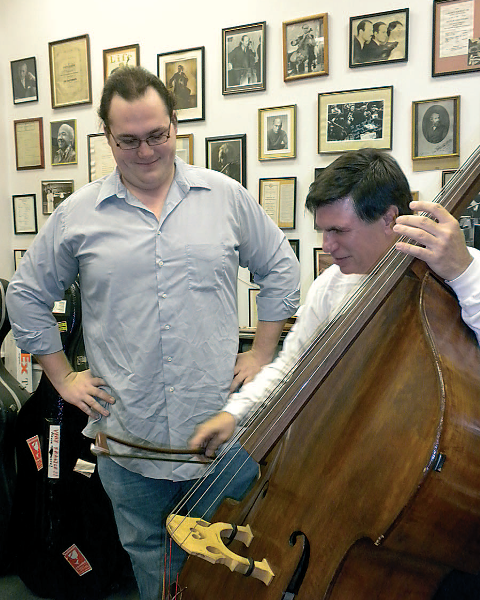 First published in the December 2010 issue of The Strad

There’s a scene in Evelyn Waugh’s Decline and Fall where the hapless hero, sent down from Oxford and taking up employment at a minor public school, is faced with giving organ lessons for the first time in his life. Waugh describes his awkward response when asked by the student how well he plays: ‘Paul felt this as not a moment for candour, and so, “tempering discretion with deceit”, he said, “Yes, remarkably well”.’

A tiny bit of deceit may be necessary if you’re faced with teaching an instrument you’ve never played before, but with a good bit of discretion you can be an effective teacher. Whether you’re a player taking a beginner strings class, a last-minute deputy, or a professor consulted by an advanced player, it might feel daunting, but you probably already have tools at your disposal, and you may even benefit. But where do you begin?

A good confidence-building starting point is to consider how much knowledge is transferable between all four instruments. Violin teacher Philippa Bunting believes that there’s a lot: ‘So much is the same. That’s the thing to hang on to. As Paul Rolland shows, the different instruments are closely related. The large body movements involved in shifting, bowing and vibrato are similar across the instruments.’

Viola professor Thomas Riebl agrees to a certain extent, saying, ‘All issues of depth and sonority of sound, tension and release, and colouring are basically the same on all stringed instruments – of course to a different extent regarding weight, speed and vibrato.’ For violin pedagogue Simon Fischer, these are a question of proportion. ‘The principles are exactly the same. You’ve got speed, pressure and distance from the bridge to play with, whether you’re playing a Baroque violin or a double bass, but the proportions are different.’

Cello professor Jeffrey Solow sounds a note of caution: ‘Teaching beginners in general string classes is very common. I have found that it often leads to technical problems later on when violinists have taught cellists – more commonly than the reverse.’ Bass teacher Cathy Elliott also warns players to stay within the boundaries of their knowledge: ‘If you’re in a situation where you have to teach an instrument that’s not your specialism you shouldn’t be expected to do it without training, or access to someone who can provide you with the advice that’s needed. The skills are transferable, but if you put a violin in the hands of a cellist it can easily look as bad as putting it in the hands of a man in the street.’

Preparation helps, of course, according to Bunting, who advises, ‘Get hold of an instrument. Play something you can play on your own instrument on the new one. It’s about having done it yourself, having tried to see what it feels like, preferably with feedback from an expert player. If you can, get access to a colleague for a lesson or two, or just to sit with you and give you feedback on how you look.’ Solow also advises back-up: ‘I would advise not completely relying on what one has learnt in string method classes that are part of a music education degree. I would talk to successful teachers to get advice on what works, what doesn’t, and what problems to watch out for.’

Facing the first lesson, the important thing is not to panic. There are many good reasons that you are going to be fine. Bunting offers a psychological boost: ‘Tell yourself everything you know, not everything you don’t know. Ask yourself what you can teach this child. You’re older than them. You’re a musician. You’re a string player. You need to count what you have. It’s about confidence – you should have the right amount of confidence to do it but not too much that you think you’re brilliant.’

A curious musician will already have absorbed useful knowledge, according to viola professor Toby Appel: ‘One would hope that a fine teacher will have paid attention in chamber and orchestral situations, and have more than a rudimentary understanding of other instruments, and therefore good ideas how to help players of those instruments on a technical level in addition to a musical level.’

Even if you don't play a particular instrument you will probably have a notion of what constitutes a good sound on it, and this can be a good focus. For Bunting, it also helps students clarify their ideas: ‘If the sound isn’t right, that’s where you go in. When a cellist is holding the weight out of the string they make a nasty waffling noise, and when they release it you can both hear it straight away. Always refer back to the sound they’re making, because they can hear.’

One area teachers may be reluctant to interfere with is basic posture, but even here there are opportunities. Bunting explains: ‘I teach the “do no harm” approach. You know how a body works, so if that doesn’t look like a body playing that instrument then you’re entitled to talk about posture.’ Fischer agrees: ‘If you look at a cellist in terms of how they’re sitting, you don’t need to know anything about the cello to know that their posture is proportionate and balanced.’

Whether or not you feel confident dispensing specific technical advice, there’s always the music to concentrate on, as Fischer argues: ‘Any good violinist could give someone a good musical lesson if they came and played the Dvorák Cello Concerto. You could say that certain things should be louder, softer, slower, although you wouldn’t want to tell them the finer details of the hand on the bow.’ Riebl agrees: ‘Working on repertoire means working on the architecture, frame, shape, mood, colouring of the piece first – which are the same on all instruments.’

Arguably, any string player with musical sense should be able to help someone of a different persuasion. Indeed, Bunting makes the point that professionally, some string players are lucky that their careers don’t depend on it: ‘Our colleagues in wind and brass do it all the time. It’s far more normal in other family groups and you won’t get a job without it. Because so many kids learn the violin we’ve got away with having a whole job where we only teach the violin.’

And sometimes, being able to bluff your way successfully is more than just useful – it’s a lifesaver, as Bunting explains: ‘There might be one child in one school with one instrument, and that’s their only chance to learn. You’re their only hope of getting on to that instrument. It just has to be done.’ She adds, ‘Who knows, it might even make you teach in a more interesting way.’

Violin
'For viola players teaching violin, everything is the same, just higher, and that little bit faster — bow strokes, vibrato, the responsiveness of the string. For cellists, with the left-hand fingers the aim is still to be playing on the pads of the fingers, but this puts the hand at a different angle to that on the cello, and the position and role of the left-hand thumb both need careful thought. The mechanics of the bow hold are entirely different when the little finger is on top of the bow, and the release of arm weight into the bow happens at a different angle, with a different feeling. As always the answer is in the sound.'
Philippa Bunting

Viola
'I was trained by my teacher Max Aronoff to use the whole bow when required, but for meat-and potatoes sound, I was to be in the lower half: the lower the better, with flat hair an