The 24-year-old Latvian violinist, winner of the 2019 Oleh Krysa International Violin Competition, reveals his strategy for dealing with competition pressure, and his biggest fear 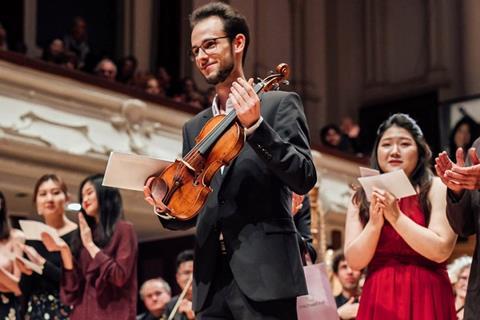 How did you come to pick up the violin?

It was a dream of my father’s to be a professional violinist. His education had nothing to do with music, but when he was approximately the age I am now, he fell in love with classical music, and especially the violin, so he bought one for himself and took a couple of lessons. Of course it was too late for him to become a violinist, although he can still play a bit, but when I was four years old he gave me a small violin to play.

And I’m still playing, even though it wasn’t until I was 15 or 16 that I started to practise of my own accord. Also my professor Boris Kuschnir played an important role in my decision to be a violinist. He was and remains more than just a teacher for me.

Can you describe your musical life, growing up in Latvia?

Although there is a lot of classical music-making in Latvia, it’s not as developed as it is elsewhere because people there are generally more concerned with problems like earning enough money to eat and live than with going to concerts.  In Riga, where I grew up, there is a Philharmonie, an opera house, ballet, as you might expect of a capital city. But there wasn’t so much opportunity for group music-making, so it was only when I moved to Austria at the age of 19 that I started playing chamber music.

How do you prepare mentally for a competition?

I tell myself it’s not a competition. At least, I tell myself that until the moment I walk on the stage and then I think, ‘Oh no, actually this is a competition.’ But then I also think, ‘what will happen if I make a mistake?’ The answer is: basically, not much. Nobody will die.

It’s a 1645 Nicolò Amati - the violin that Christian Ferras played when he was young - and it’s an absolutely amazing instrument for me. I was honoured to be loaned it after winning the third prize in the Michael Hill competition in Auckland, in New Zealand last summer, and I’ve never had the opportunity before to play something like this. People say it sounds like hot chocolate, and I think that’s a good description. But, aaah, I have to give it back in one and a half years.

What is the best musical advice you have been given?

My teacher told me that I need to bring something special to every note. He said that it didn’t need to be good or bad; it was enough if it was just mine. I have a lot of respect for anyone who makes something sound unique. Of course there are some morality rules to follow and an interpretation can obviously sound beautiful or disgusting. But as long as it’s not disgusting,and it’s unique to the person, it usually works.

What drives you on?

At the moment, the violin I’m playing. I feel that every day that I don’t practise is a day that I’ve wasted it. Just playing it for the sake of it is a pleasure.

Is there such a thing as talent?

Maybe. All I know is that if I think I don’t know how to reach a goal, then I probably won’t try. And that means I’m probably not talented in that area.

Is there anything that terrifies you?

It’s important to me what other people think of my playing, and that they discover what I’m doing. Although that doesn’t sound so nice, I mean it in a good way. If the reaction of the public is negative, then that’s fine with me. But if there is no reaction, then I feel that I’m doing something wrong.