Jascha Heifetz’s US debut at Carnegie Hall in October 1917 sealed the 16-year-old’s reputation as an astonishing and unruffled performer - but for all his musical maturity, Heifetz was still just a teenager, as Dario Sarlo reveals 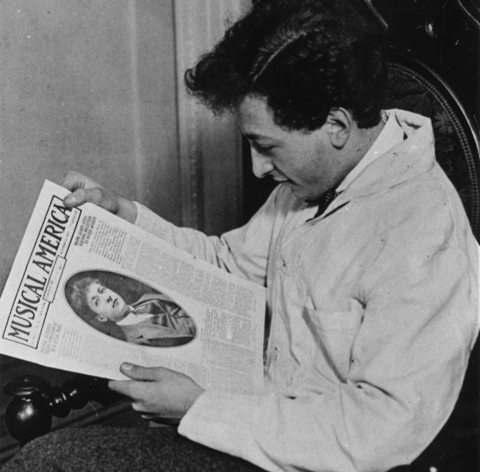 The young Heifetz reads reviews of his performances in 1917

The following is an extract from The Strad’s November 2017 issue cover story on Jascha Heifetz’s 1917 US debut – to read the full article download the issue on desktop computer, buy the print edition or subscribe.

With all the fame and fortune that encircled Heifetz’s debut US season in 1917-18, it is easy to forget he was still just a teenager. During a recital at Smith College in Northampton, Massachusetts, the young violinist became ‘almost paralyzed with fright’, and ‘trembled with fear and self-consciousness’, according to Helena Smith writing in the Springfield Sunday Union and Republican (4 March 1928). The reason? Smith College was (and still is) a women’s liberal arts college, and when Heifetz arrived on stage he found himself surrounded by an assembly of young women.

Other tales reveal that despite what could be a ‘sphinx-like’ appearance on stage, Heifetz was anything but that in his free time. The boy delighted in playing pranks on his parents and his accompanist André Benoist, with whom he often engaged in play-fighting. One of his most effective pranks involved tying his finger in a rag soaked with red ink and feigning injury. On another occasion, while boarding the public transport system in Kansas City, Heifetz ‘jabbed a finger at each and every pushbutton on the street car as he fled laughing to the rear door’, according to a reporter for the Kansas City Star (13 February 1918).

The boy also began to collect some rather unusual ‘toys’, including blunderbusses, Captain Kidd cutlasses, a Chinese headsman’s sword and a German bayonet. Accompanist Benoist joked in the San Antonio Light (10 November 1918): ‘Unless young Heifetz is surrounded by these cherished possessions his artistic temperament does not respond to the call for his best work.’

With an adoring public and a seemingly never-ending flow of concerts, and in light of the continuing political turmoil in Russia, Heifetz and his family saw no reason to leave the US. By the end of the season they had moved to a larger apartment in Manhattan, purchased a motor car, hired a chauffeur and enrolled Heifetz’s two younger sisters in school. Adding to the sense of comfort was the fact that the Heifetzes had extended family living in both Boston and New York, and they kept in close contact with them. The Heifetzes spent their first American summer in the exclusive enclave of Narragansett Pier, Rhode Island, a small picturesque coastal village that hosted many wealthy New Yorkers during the summer month.

Read: Jascha Heifetz’s US debut a hundred years ago

To read the full article download the issue on desktop computer, buy the print edition or subscribe.