Esther Yoo: ‘I try to share my journey so that people are aware of the challenges, not just the fancy end product’ 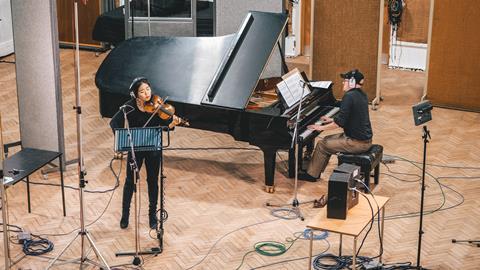 Recording the soundtrack for On Chesil Beach with composer Dan Jones at Abbey Road Studios, London, in 2018. Photo © Pieter Peeters

Yoo knows what it’s like to struggle with practice, to have doubts and to lose confidence, and she uses social media to share her hard-won knowledge. Her YouTube channel features, for example, practice-tip videos and analysis of ricochet in the cadenza of the Mendelssohn Violin Concerto, and via The Strad online she offered ‘Ten ways to motivate yourself to practise during lockdown’. She says, ‘There is a great hunger for educational tools in music, for insight into what it is to be a young classical musician. There are people who are starting to learn the violin in their forties, others who have been playing an instrument since they were a little kid. Not everyone has access to great teachers or to a music school, and if they are at home with their computer and feel like a small part of this world, that gives encouragement. I’m not just sharing my knowledge, it’s two-way communication and it’s ongoing.’

Read: ‘We aren’t going back to how it was’ - Esther Yoo on being a musician during the pandemic

She wants to dispel the mystique of the international concert career, too. ‘We go on stage and present ourselves in the best way possible, but there’s so much that goes on behind the scenes – the emotional hardship of travelling all the time, which takes a toll on your body and your mental state. I try to share my journey so that people are aware of the challenges, not just the fancy end product.’ But it’s the life she knows and – mostly – loves. ‘I’m dying to get back on a plane, to travel and perform in different places and make music with friends again. But I suddenly realised, when I wasn’t able to travel last year, that I had time to think, to reflect and make plans calmly, without having to give answers immediately or be tied to anything. In the future, I hope we will all feel able to demand the space we need to function at our ultimate level.’

Yoo’s diary is a work in progress, but among other performances she will give a Wigmore Hall recital on 20 September, and will tour with the ZEN Trio in Asia and Europe in 2022. She has been rescheduled to record the Barber Concerto and Bruch’s First with the RPO in November 2021. This past year has led her to re-examine the future of music performance. ‘As we look towards the unknowns of post-Covid life with both anxiety and great excitement, I’m eager to explore different formats and environments of music making, outside the traditional classical concert context.’ And what might this look like? ‘It could involve more film music, eccentric collaborations or a diverse choice of repertoire. After such a long period of confining our artistic expression, I believe now is a time when we should really dare to unleash our creativity.’