A blessing in disguise: recording Piazzolla’s works during a pandemic

In this extract from the August issue Session Report, violinist Karen Gomyo shares the challenges imposed by Covid-19 that resulted in unprecedented upsides while recording her new album of works by Piazzolla 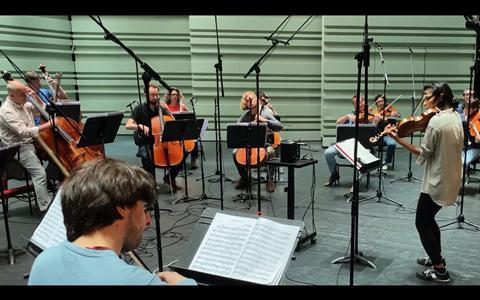 The following extract is from The Strad’s August issue Session Report on Karen Gomyo’s recording of Piazzolla’s Four Seasons of Buenos Aires and other works. To read it in full, click here to subscribe and login. The August 2021 digital magazine and print edition are on sale now

‘It was my first time meeting the orchestra, and of course in a situation like this you always wonder how it’s going to work out. But because we were coming out of a universally confusing lockdown, I felt that we immediately bonded through a deep desire to put our best into the project.’ Social distancing was mandatory, and although this is a familiar sight to us now, it was not yet the norm in June 2020 when the sessions took place. About the restrictions, Gomyo says, ‘We had to find our sound together when we were spaced out. A lot of new elements gave it an unprecedented freshness.’

For The Four Seasons the string orchestra was positioned in two semicircles: five violinists in the front and five in the back, with the other instruments placed sporadically throughout. Gomyo played the conductor, using her expressive body language to lead the players. When recording, the spontaneity that comes with playing to an audience can be lost. But Gomyo took this as a blessing in disguise and used the opportunity to express the music’s sensual and physical nature by facing the orchestra. As for interpretative choices, Gomyo decided on certain ornamentations and improvisational liberties early on to make the whole process smoother. Rather than limiting the sense of spontaneity, this in fact lent itself well to Gomyo’s personal understanding of Piazzolla’s sense of structure.

Gomyo and Jones recorded Histoire du Tango, as well as the solo etudes, in a church in Berlin in August 2020 – as opposed to the French orchestra hall used for The Four Seasons. ‘Violin and guitar together produce quite a delicate sound, so to have the church acoustic to play with was nice. Similarly, for the solo pieces it was beautiful to have some feedback around me,’ says Gomyo. The more intimate setting also allowed her to explore more fully Piazzolla’s writing for the violin. She explains that for her, the violin is a ‘voice of femininity and tenderness, yet also percussive. A lot can be explored on the violin: it is a multidimensional instrument.’ On the other hand, ‘when you’re playing with an orchestra, you don’t want an acoustic that’s too boomy. You want clarity and to hear the basses; otherwise you take away the percussive quality’. The album’s mixing was performed by Hans Kipfer, an audio engineer with whom Gomyo had already worked on her previous albums. ‘I trusted the label and it was a harmonious process’, she says of the collaboration.

Having been the catalyst for so many global difficulties, could the Covid-19 pandemic really trigger the creation of something good? For Gomyo, the answer is yes. As she makes clear, recording Piazzolla’s raw music in an increasingly confusing world was a profound experience for all concerned. From New York and Paris to Buenos Aires and Mar del Plata, Piazzolla absorbed much of the 20th century’s kaleidoscope of musical movements, styles and trends. He learned from Nadia Boulanger, studied Bach to Bartók, frequented jazz clubs and revolutionised tango, not to mention living through 1920s New York, the Second World War and an Argentinian dictatorship. But at his simplest, he was a wonderful musician, who created honest music and touched many along the way. Gomyo’s experience of recording the album is not so different. ‘It was wonderful to come together after being home for months and to be with fellow human beings and musicians. And now we have a recording to show for that beautiful experience and memory.’