5 ways to improve playing in thirds

Tips for hand position, bow distribution and intonation from The Strad Archive 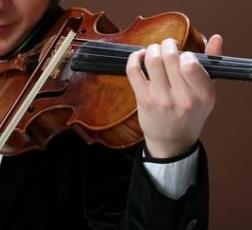 Three key points to watch in playing thirds are:

A common mistake is the exclusive concentration on intonation without considering the placement and angle of the left hand. When the hand position is not correct, ease and agility in all positions, and thus good intonation, becomes impossible. To develop a good position I first recommend exploring thirds with the following exercise:

Finger placement should be lightly rounded (note especially the angle of the little finger) and should remain unchanged in all positions. This exercise also assists in developing sensitivity to the difference between major and minor thirds.

De Beriot, in his violin school, very wisely wrote: 'True intonation in double strings requires an exquisite sense of harmony. In order to acquire this precious quality, the pupil must become familiar with those thirds and sixths which are consonant with the open strings G and D. These lower strings are only set in motion when the higher stopping is played with the most perfect accuracy; then a third sound is produced, which serves as a regulator to the ear and to the position of the fingers. This true intonation of double strings once acquired will extend to all parts of the violin.'

You can improve your playing in 3rds by practising placing the fingers separately. Put the third finger down on its own, without the first finger. Balance the hand so that the third finger is naturally curved, relaxed and comfortable.

1. Without altering the balance of the hand, or the shape of the third finger, reach back with your first finger and play a major or minor 3rd.