It is generally accepted that string sections should bow as a collective, but could this uniform approach sacrifice the composer's intended sound? Violist James Boyd argues in favour of greater freedom 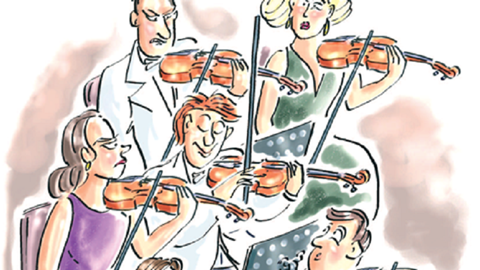 Generally bowing decisions are based in pragmatism, rather than any great artistic ideal. And the solutions tend to be quite arbitrary. A long phrase might be split right down the middle, creating two shorter and squarer ones, and small but interesting details of articulation are sacrificed for the sake of some supposed greater unity.

Of course, synchronised swimming is fascinating, but during a performance of Beethoven wouldn’t you prefer to see each individual musician face their own personal struggle?

For most orchestral players, doing the wrong bowing and being the ‘odd one out’ is the stuff of nightmares. Woe betide you, if you play even one note the wrong way round – how unprofessional! It's a religion! Tiny, insignificant details seem to be discussed and dissected endlessly.

It is common for players to put down their instruments and forgo the only chance to play the piece before the concert in order to fix the part. Often in amateur orchestras discussing bowing seems to be the only thing that goes on in rehearsals. Maybe this ‘office work’ is important because it gives the impression that we really do know what we are doing and enables us musicians to feel like we have ‘real jobs’. Perhaps worshipping in the Church of Bowing is a displacement activity, allowing us to put aside the more vital issues of phrasing and articulation, and communication and meaning.

Listen to some Furtwängler recordings, an example of some of the most extraordinary orchestral sounds ever produced. Furtwängler hated rigid bowings, as did Stokowski. Even these days there are some conductors who understand that long legato lines can only be made if everyone changes at different points, but often they are met with resistance from orchestras. Interestingly, free bowing thrives in the film music world where money and time are of the essence.

With their invisible bowings, the great session orchestras can produce a wonderful legato string sound. Fixed bowings stifle individuality. Bowing is analogous to breathing, and being told when to breathe, how deeply and how much oxygen our blood needs by some external authority is a very uncomfortable feeling.

I’m sure all good string players have at some point had that marvellous feeling that anything is possible with the bow – up or down, heel or tip, spiccato or staccato – as if playing with a magic wand. Good, sensible, organised bowings rule out many of the more unusual solutions that might be possible or even desirable. Take the wonderful feeling of a long diminuendo on an up bow to pianissimo at the heel. This sort of thing is almost completely banned in the world of sensible bowing and yet it is often exactly what the music demands.

There is a commonly held belief that a sforzando must always be played on a down bow irrespective of where it comes in the phrase, because it is easier. Bowing must be adjusted accordingly. However, often the sforzando is at that point in the phrase because it falls on a weak beat or bar. Adjusting to a down bow turns an interesting, emphasised weak beat into a plain old strong beat.

It is amazing how little writing in the part is really necessary. I have some wonderful 18th-century quartet parts that, despite having been obviously well used, contain no markings at all. It is very exciting to play from them, and their age and value means that pencils are certainly not allowed!

To a modern eye they are very sparsely marked and have many inconsistencies, but we can get used to reading them in a different way very quickly. It is interesting to note that sometimes there are particular bowings specified, but only when the composer insists. Much of the time freedom is given to the performer to use their good judgement and personal taste.

Choosing your own bowing makes for a more committed performance

'Doing your own thing' is what makes concerts that change the world. It means that you must be totally switched on to what is going on around you. Really committing to a note or phrase forces us to be hyper-aware of our own sound and that of our desk partner.

These quotations were extracted from a larger interview, published in The Strad's March 2007 issue. Subscribe to The Strad or download our digital edition as part of a 30-day free trial. To purchase single issues click here