Chad Hoopes: ‘I want to pass along the knowledge and the influences that I have had’ 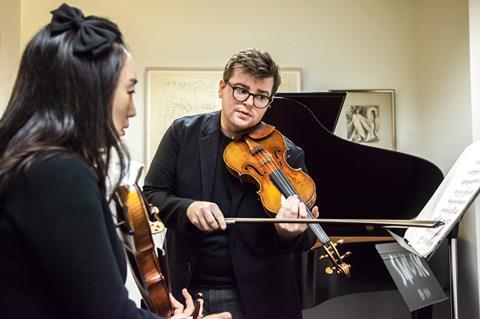 The following extract is from The Strad’s November 2021 issue   feature ‘Chad Hoopes: State of Independence’. To read it in full, click here  to subscribe and login. The November 2021 digital magazine  and print edition  are on sale now

Although Hoopes’s recording plans have been delayed and his performing schedule interrupted, the pandemic has brought him early to a new juncture. He had already been in discussions with Southern Methodist University in Dallas about taking on a teaching position there, and it was just as institutions in New York were shutting down that he was offered the post of professor of practice in violin. Having taken it on, he is emphatic about wanting to continue, post-pandemic.

Based at the university’s multidisciplinary Meadows School of the Arts, the role puts him in touch with a more broadly academic environment than might have been the case at a more specialist institution. ‘Many of my students are majoring in other things, not necessarily violin performance or even music. Those are some of the most interesting students that I get to teach because they are so quick and so bright and articulate, and really willing to work hard and soak up everything that they possibly can. That’s where it’s fun because I feel like I can leave a deeper impression artistically.’

He hopes to be a ‘bright spot’ in their lives at a difficult time. ‘I can’t imagine what it would be like to be at a conservatory during these days – it’s supposed to be a time when you’re with your friends playing tons of chamber music and reading and listening to recordings with a glass of wine: all of these things that I was able to experience, they haven’t really been able to experience.’

And he downplays the idea that his experience makes him an authority figure; he pictures himself as more of a role model and custodian of the art form: ‘I want to pass along the knowledge and the influences that I have had. And we all have a responsibility to preserve the rich traditions that have come before us. Everyone feels this in a certain way. But there’s a legacy that I want to preserve, at the same time as introducing a kind of 21st-century mentality of what it means to be an artist today. It’s not enough to be a good violinist any more. So many young people’s mindsets are: “How am I going to be a superstar? How am I going to be famous?” And that’s a touchy thing. The industry is changing and there’s a need for more than just that.’

Another aspect of his role at the Meadows School of the Arts is the young artist programme he is establishing for high-school students who are a couple of years away from applying to conservatoires or universities, giving them a foretaste of the environment and early experience of playing alongside advanced-level colleagues. ‘It’s a programme that allows them to be part of the community of conservatory students. So they have to audition and they have to be, bare minimum, at the level of the conservatory students as a high schooler. They have to be very gifted so they can be placed within chamber ensembles and in the orchestra, participate in violin classes and perform alongside the conservatory students.’

Hoopes explains that this reflects his own positive experiences as a school-age musician on a similar programme at the Cleveland Institute of Music. ‘A lot of the skills needed to be a successful musician we learn on our own: everybody has their own path, everybody has their own musical voice and we are all affected by the world around us in different ways. The most meaningful moments on my musical journey have been when my teachers or my colleagues have treated me as an equal and looked at me in a serious, very collegial way, even when I was much younger than them. That’s how I want to work with my students because I think it’s a much more open way of communicating. And also it leaves room for me to learn, because there’s a lot that I can learn from my students.’