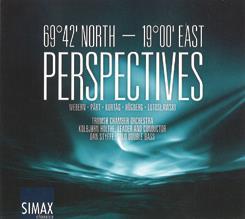 The documentation for this disc tries a little too hard to relate what is primarily a programme of music from eastern Europe to the fact that the performers are based north of the Arctic Circle: ‘Perspectives from Music’s Northernmost Boundary’. Whether in interpretative terms this perspective has any more relevance than one from, say, Tasmania is a moot point. What is unarguable is the firmness and distinction of the Tromsø Chamber Orchestra’s playing in these five works for string orchestra, recorded in an atmospheric church acoustic.

The Norwegian-based players capture the aphoristic, condensed emotionalism of Webern’s op.5 as successfully as they toll the melancholy scales of Pärt’s Cantus and breathe the sighs of Kurtág’s brief Aus der Ferne III. The intensity of Lutoslawski’s Musique funèbre is unrelieved, in a performance that combines finely attuned solo work alongside unisons as sonically deep as a passing bell.

The general funereal gloom is relieved by the one Nordic work here, a double bass concerto by the Swedish composer Fredrik Högberg. It’s a work that perhaps relies too much on persistent arrhythmia rather than lyricism but it gives the energetic bassist Dan Styffe plenty of opportunities to let rip in music with such sections as ‘Like a pizza with everything on’ and ‘Premature cadenza’.