Staff insisted the two violins - one a half size - be checked into the hold, despite clear guidelines on its website stating violins are allowed in the cabin 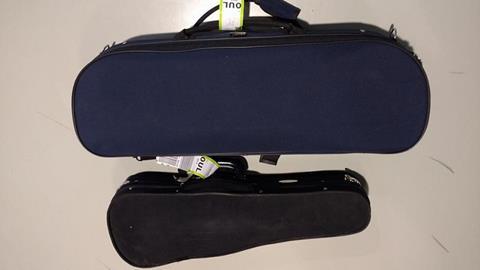 Norwegian Air refused to allow two violins - one a half size - into the cabin last week, despite changes to its hand baggage policy to permit violins and violas in the overhead compartments, according to a musician.  Oulu Sinfonia concertmaster Maksym Filatov reported the incident, which involved his friend and her daughter, on his Facebook page.

'Airport workers rudely refused to take two violins on board [in the cabin], saying 'you have just two minutes to decide [whether] you are going [on this flight] or not', even though one of the instruments was a 1/2 size and fit normal hand baggage size [regulations],' he wrote. 'They also said that because of late check-in the instruments [might arrive] tomorrow or the day after tomorrow, just laying somewhere at the airport under hundred of bags! We have written to customer service and [are] waiting for response. Luckily the violins came through OK [after being checked into the hold].'

Earlier this year Norwegian airline staff twice insisted musical instruments be checked into the hold in the space of a week. Helsinki Philharmonic violinist Ari Vilhjalmsson reported that staff had refused to transport his €200,000 violin in the cabin, citing airline policy, despite Vilhjalmsson having flown with his violin safely stowed in the overhead lockers on numerous occasions. The violinist was forced to miss the flight and re-book with another airline. Subsequently violist Patrick Rutland contacted The Strad about a similar incident.

Norwegian Air quickly responded to condemnation, promising to review its musical instrument policy, and unveiled its new rules in February:

‘We understand that sometimes you’ll want to bring your instrument with you on board. You can bring a small musical instrument on board provided you do not exceed the hand baggage allowance for your fare type. If you’re travelling with a larger instrument, such as a violin or viola, then you can bring this instead of a carry-on bag. The instrument can be slightly bigger than a regular carry on bag, but must not exceed 90 x 35 x 20 cm and the carry-on weight limit for your fare type.