The British violinist, who has performed with the VSO for six years, takes up the post with immediate effect 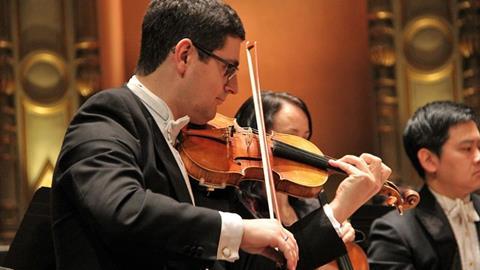 The Vancouver Symphony Orchestra has appointed Nicholas Wright as its new concertmaster. The British violinist, who has performed with the VSO for six years, takes up the post with immediate effect. He replaces previous concertmaster Dale Barltrop, who concluded his tenure in June 2016.

Wright was selected after a series of open auditions during the 2016-2017 season, which saw more than half a dozen candidates each spend a week leading the orchestra as guest concertmaster.

'I'm delighted to congratulate Nicholas Wright on his appointment as concertmaster of the Vancouver Symphony Orchestra,' said music director Bramwell Tovey. 'He was part of a field of outstanding Canadian and international candidates, including members of several internationally renowned ensembles. His leadership as a musician and teacher in our community has been enjoyed by our city for several years.'

A graduate of London's Royal College of Music, where he studied with Itzhak Rashkovsky and Rodney Friend, Wright was appointed as the youngest member of the London Symphony Orchestra in 2003, where he held the first violin sub-principal position. He has also performed as first violinist of the Koerner Quartet and is on the faculty of the VSO School of Music.