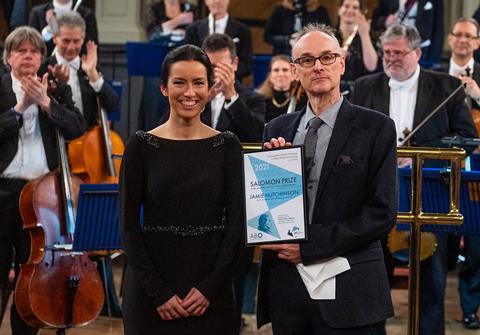 Oxford Philharmonic Orchestra sub-principal violin Jamie Hutchinson has been awarded the Salomon Prize in recognition of the educational initiatives she kickstarted with the orchestra in the face of the pandemic.

The award, given by the Royal Philharmonic Society in conjunction with the Association of British Orchestras, was presented to Hutchinson by ABO chief executive Mark Pemberton, in a concert given by Oxford Philharmonic at Oxford’s Sheldonian Theatre on 10 December.

As the pandemic took hold in 2020, Hutchinson headed a six-week #OPatHome series with the Oxford Philharmonic Orchestra, filmed from the musicians’ own homes during the first lockdown. The series introduced primary school children to music-making, with members of the orchestra introducing their instruments, telling stories, performing legendary musical excerpts and suggesting interactive activities.

Following the success of this summer series, she led members of the orchestra in further family-friendly music videos released online on the orchestra’s YouTube Channel in winter 2020. Due to the coronavirus crisis, musicians were unable to continue their usual work in schools meaning that, without these videos designed to entertain and infuse music-making with a sense of fun, children might have missed out on these music-making activities

Hutchinson told The Strad, ’I’d really like to thank the orchestra for their tremendous support and open-mindedness. We were able to reach so many children during the pandemic and also create work for lots of my colleagues.

’Receiving the award has been the most incredible thing to happen as a result of the pandemic. I’m completely bowled over and incredibly humbled. We musicians - particularly freelancers - don’t often receive recognition for our work other than the immediate reaction of our audiences and participants, so this is a really special thing.

’I can’t stress enough how much the musicians of the orchestra rose to any challenge I faced with them. From making remote recordings through to improvising live on Zoom and splatting me in the face with custard pies… their willingness and good humour was exemplary!’

Music director of the Oxford Philharmonic Orchestra Marios Papadopoulos, said: ’For many years Jamie has been at the heart of the outreach work of the Oxford Philharmonic. Her drive and creativity have been a huge asset to our programme. Through dozens of workshops with schools around Oxford she has led teams of musicians that have inspired thousands of children, mostly devising the projects herself.

’Jamie, in collaboration with our fantastic outreach team, has helped the orchestra reach more children than ever before. Such work so often goes unnoticed which is why it is particularly pleasing that Jamie is getting the recognition she deserves with this award.’

The Salomon Prize is awarded annually to an orchestral musician working in Britain who has made an outstanding contribution to the life of their orchestra and their audience. All orchestras who are members of the ABO are invited to nominate candidate for the prize.

Read: Coping with Covid: How string courses dealt with the pandemic in 2020