The thief in Dortmund, Germany, attempted to sell the instrument to a member of the local symphony orchestra who happened to know about the theft 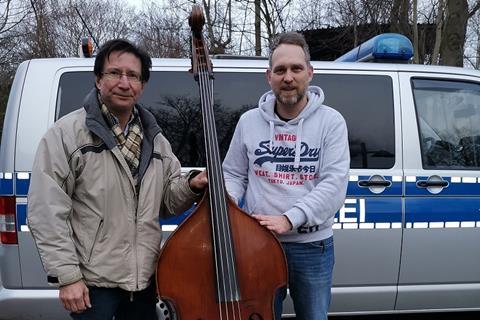 Detective inspector Daniel Müller of the Dortmund Police, right, handing over the bass to its owner

A double bass, stolen from the Konzerthaus Dortmund Konzerthaus on 11 January, has been recovered after the thief attempted to sell it two weeks later.

The thief, a 43-year-old man, approached a musician in the centre of the city ostensibly asking for advice about how to go about selling a double bass. Unwittingly, however, he was talking to a member of the Dortmunder Philharmoniker who knew about the theft.

The quick-thinking musician offered to help and gave the thief his mobile phone number. He informed the local police and a sting operation was set up. The thief called back, provided his address, and an arrangement was made to take a look at the instrument two days later.

The thief was arrested in his apartment in the Kaiserbrunnen district in possession of the stolen bass, and taken for questioning.

The bass was reunited with its owner later that day (see photo).