Melbourne Symphony Orchestra enacts a stand down of musicians 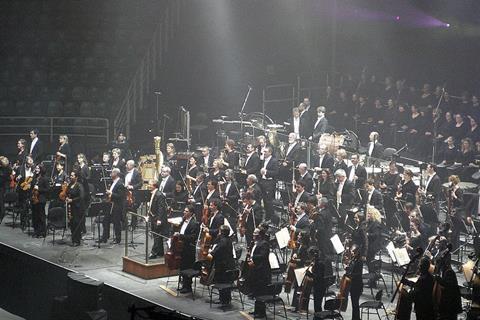 The Melbourne Symphony Orchestra has told its musicians that they will be stood down without pay next week, keeping only ‘essential’ employees on staff during the lockdown - and these would take a 20 per cent salary cut.

However, according to a spokesman, the ensemble intends to bring back all employees once the crisis is over.

In a letter sent to employees, MSO chair Michael Ullmer said: ‘Our overriding objective is to preserve this great organisation so that it can prosper into the future. It is critical that when we recommence normal operations, the MSO is not in an irreparable and depleted state.’

He continued: ‘Without the ability to give live orchestral concerts, we have lost a significant portion of our revenue, being ticket sales, as well as flow on effects to donations and corporate sponsorship.’

The MSO cancelled its season in mid-March, when the state enforced a 500 capacity limit for events. But the organisation had been hit by the impact of the coronavirus as far back as early February, with many cancellations at its Chinese New Year concert. It also lost expected revenue from a recording of the concert.

The orchestra initially tried to keep playing through the crisis, broadcasting free concerts from empty concert halls live on YouTube. However, due to reasons of health and safety, this proved unsustainable, and they are now releasing archival recordings under the hashtag #KeepTheMusicGoing.

After an MSO board meeting on Monday, the organisation announced that ‘we have no other option at this time than to enact a stand down of our musicians in accordance with the Fair Work Act.’

Under the act a stood-down employee may not be paid but still accrues leave. The MSO said it would also keep paying musicians’ superannuation.

12 adminstrative staff have already been stood down, while the musician stand-down will take effect next Monday.

The MSO is currently applying for access to the JobKeeper employee support scheme, but said the process ‘may involve some delay’ and payments would not start to flow through until the end of April.

‘These are challenging times for everyone,’ the letter concluded. ‘Rest assured the MSO will be back performing live to its thousands of ardent supporters in the not too distant future.’