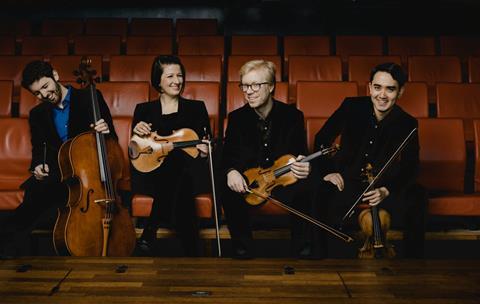 In a statement, Sulivan Sweetland praised the ensemble’s ability to bring ‘a real zest for life to its music-making, which is fresh, compelling and full of vitality.  They are young musicians who are not afraid to take risks and are undoubtedly developing into an exciting and impressive young ensemble.’

Previous accolades include the 2018 Royal Over-Seas League Competition, which they won. They were placed second at the 8th International Joseph Joachim Chamber Music Competition, and were also awarded the Special Prize for the best interpretation of a contemporary work (Four Quarters by Thomas Adès).

The group’s 2019/20 season will include debuts at the Berlin Philharmonie, the Amsterdam String Quartet Biennale and the Graffenegg Festival. The ensemble will also present their first Beethoven quartet cycle, with Musik I Syd (Music in the South). In June 2020 they will tour to Japan with performances in Osaka, Nagoya and Tokyo.

In 2017 the Marmen Quartet took part in a Beethoven masterclass with the pianist Alfred Brendel at Kings Place, London. An article about the session appeared in the May 2018 issue of The Strad.