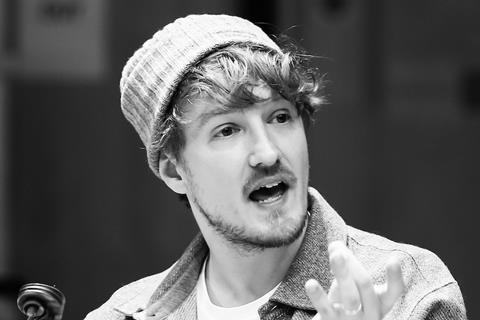 The violinist Daniel Pioro has joined the Royal Conservatoire of Scotland as Associate Artist in Contemporary String Performance.

An advocate of new and experimental music, Pioro has launched a new contemporary music collective featuring 13 students at the RCS. He will work intensively with his newly-created consort of four cellists, two violinists and three viola players, as well as four composers, over the next twelve months, exposing them to the daily workings of artists from all fields. The line-up will change every year.

Pioro said: ‘This is not just creating a group to play nice music. It’s about so much more,’ explained Pioro. ‘Studio Collective is a group that exists to see how far we can push music, to explore how the music we make can be a work of art in its truest sense, treated with the same awe and preciousness as art in a gallery. It’s collaborating with people from other creative backgrounds, such as dancers and visual artists, and working in responsive and reflective ways to create our own music inspired by original works, in a format that hasn’t been heard before. It’s showing the students that there are no limits, and challenging them to think deeper. They’re the ones who will decide how far to take things.’

Four composers from the Royal Conservatoire will write for Studio Collective: ‘A vital element of this project is to highlight the working process and relationship between composer and musician — it’s a privilege to have music written for you,’ said Pioro. ‘We’ll be workshopping and recording and the plan is to release a vinyl recording of our music at the end of the year, that’s based on our study and analysis.’